Whenever another nontoken creature enters the battlefield under your control, you may draw a card. 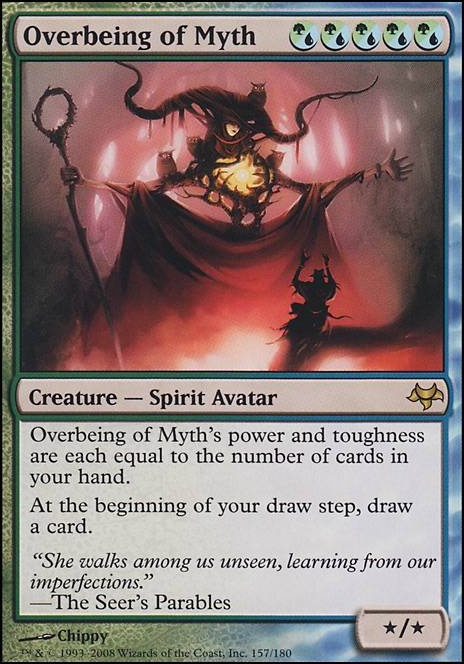 Welcome To Naya
by Omniscience_is_life

Soul of the Harvest Discussion

Garruk's Uprising has been one of my favorite new cards in a while. At 3 mana it comes down early, and can draw you a card immediately as long as you have a beater out which makes it good at any stage of the game. Then it gives you that incremental value that plays with your big guys pretty well since they're all HUGE. All that and the fact it also gives trample is almost too easy to include. Basically a strictly better Elemental Bond and it's been really good for me.

On another note, I agree with you about Warstorm Surge. I've always found it to be a little too slow for my tastes and I always would rather just play a big beater to be honest. Terror of the Peaks has been such an overperformer since I decided to put it in, and I'm seriously considering dropping warstorm for something like Defense of the Heart.

Elder Gargaroth is another one that's been really fun to play around with. I'm almost thinking it would be a better Soul of the Harvest. I'm a sucker for drawing cards, and Gargaroth is super busted, especially when you double its power and give it haste. Basically guarantees that you at least get to attack and draw when you first play it, and that it's big enough that it's unlikely to die to blockers unless your opponents want to go out of their way to kill it. The other effects are just gravy, and the fact that it can draw when it attacks or blocks, AND has vigilance makes this thing another wall of text like Kogla, the Titan Ape and Questing Beast.

Grothama, All-Devouring is a fun include, cause it can be sort of political if you need it to be, or just a 20/18 beatstick. I normally treat it as a draw spell for myself though. You can play her, pump one of your other creatures, and swing it at Grothama to draw a crazy amount or sac it to Greater Good. You could also play it right before you drop something like a Blasphemous Act to draw 13 cards or even hit a fat Traverse the Outlands.

I mean Soul of the Harvest and yeah I had the OG kozilek. Dont know why I took him out. And how about natural order? It doesn't hit the two big eldrazi but I can tell you it feels real good to natural order my general on t3 and smash a terrastadon

Renata Calls For the Hunt

I really like the concept, have tried out this deck and worked very well. It has so many really good ideas, fast, surprising, so nice to see cool combos built around Renata. Just one suggestion - it is just a "maybe" and not a "must": Soul of the Harvest. Soul of the Harvest works well with a creature with persist ability and Renata, since it means infinite card draw. (Aerie Ouphes and the Manticore, since Woodfall Primus will win the game anyway with a sac outlet.)

Soul of the Harvest is my fav.. i play Marwyn, the Nurturer so i get alot of value from him