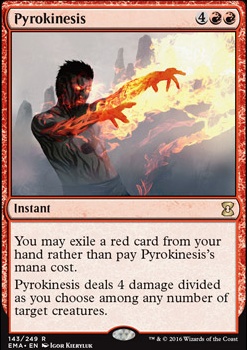 You may remove a red card in your hand from the game rather than pay Pyrokinesis's mana cost.

Pyrokinesis deals 4 damage divided as you choose among any number of target creatures.

@RNR_Gaming: I was mostly memeing. But in all seriousness, Pyrokinesis has been a long-time piece of sideboard tech in Legacy and Vintage for Goblins to deal with Force of Will . Often, decks like Fish can play a threat and then protect it with free countermagic. This means the Goblins player has to choose between playing a threat of their own (which gets countered) or killing the opponent's threat (which means the Goblins player loses tempo).

Boarding in Pyrokinesis means you can keep up with the opponent's free spells, as well as get more work out of Aether Vial and Cavern of Souls . People badmouthing Fury don't realize just how much the card will help with red midrange and toolbox decks deal with cards like Force of Negation . It's ESPECIALLY going to help vs. planeswalkers that are able to stay out of Lightning Bolt range.

The cards I suggested have multiple targets: Sway of Illusion targets any number of creatures for 2 mana, Pyrokinesis targets up to four creatures for potentially no mana, Tidal Visionary can repeatedly target for 1 mana, and so on. Add that to opponents' creatures getting sacrificed whenever they're targeted, and Sway of Illusion becomes approximately "Choose any number of target creatures. Their controllers sacrifice those creatures. Draw a card." for .

Since it's an enchantment, I imagine it being used mostly as long term removal, in that every targeted effect you draw becomes a potential kill spell.

Check out Blinding Flare , Pyrokinesis , Sway of Illusion , Bloodlust Inciter or Goblin Motivator , and Tidal Visionary for some cheap starters.

Should Pyrokinesis be on here?