Put all creature cards from all graveyards onto the battlefield under your control.

Game of Dethrones
by Ragthartys

Thrax The Black Rose
by psyko_mantis1 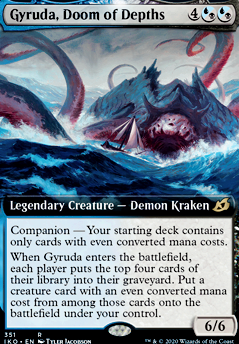 Rise of the Dark Realms Discussion

Alright Themysteriousone and Snap157, I finally got to play the deck and it did really well but I thought I'd see if you two could help me tune this deck up a little.

I played two, four player games and won the first and almost won the second. Both games were 3 versus 1 since I was quickly the biggest threat. The first game Tidal Barracuda won me the game. The Niv-Mizzet, Parun player let it resolve because it helped him but it also let me cast Rise of the Dark Realms late game after I already milled over 3/4 of my opponents decks and get a ton of creatures for a stupid flashy win.

The second game I continued to mill and get value but just couldn't close out the game, I came close to milling everyone out but I would also have milled myself out before I could get the final player since I drew quit a few cards during the game. The game ended up almost being determined by cards in the library since the player who won only had like 3 cards lefts before he would have decked but he was able to kill the last opponent instead.

What I came to realize is that during the game as my library was dwindling down to almost nothing I began getting increasingly nervous because I was on the verge of milling only myself to death. I don't have a way to do much of anything without cards in my library and I don't have a way to replace my draw to avoid losing to having 0 cards in my library. What would you recommend adding in the deck to help mitigate this? I was thinking of adding Snapcaster Mage and maybe Gravepurge or something that will let me shuffle in select cards to my library. Any help is appreciated.

DemMeowsephs, this is it I think. I wasn't able to work Rise of the Dark Realms in, but I think it'll be ok with the graveyard diggers that are in the deck already. Thank you for all your help!

If we want to run a land destruction suite we certainly can, but no matter what, people gonna get salty. Targeted removal is going to be less salt-inducing than mass land destruction (MLD), but it's gonna make people upset enough to counter punch you a bit. You gotta acknowledge and be prepared for that if you're going to do it...no getting upset if someone reacts to you blowing a few land by knocking you for 20 (even if it may be an overreaction). Picking and choosing your targets carefully instead of going for everything will also help. We can also be sneaky about it...cards like Decimate, Star of Extinction, and Terastodon aren't explicitly or primarily land destruction, but they hit land anyways, and people are less likely to be upset at that.

Here's what I'm looking at for big spells (I would pick 4 or so at most): In Garruk's Wake, Rise of the Dark Realms, Liege of the Tangle, Praetor's Counsel, Terastodon, Star of Extinction, Destructive Force, Omnath, Locus of Rage, Boundless Realms

I just made a Toshiro Umezawa as well. A lot of similar cards, but its good to remember that the instants are there for control. I.E controlling the board state and making sure you don't die. Otherwise, they are good for drawing ect.

Something I would recommend is to add a few more mana rocks and maybe a few more wincons. For example, I have Aetherflux Reservoir, Torment of Hailfire, and Rise of the Dark Realms as some really good wincons. They can be a bit pricey though. While you can keep it at 36 instants, I'd probably go down in between 28-32 instants.

Here's the one I built: Toshiro Umezawa

Hope that helped :) Some of those were suggestions people gave me to help me as well.