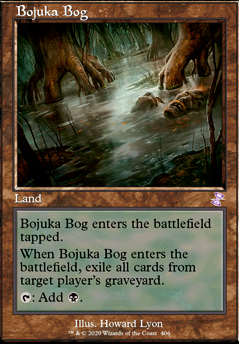 When Bojuka Bog enters the battlefield, exile all cards from target player's graveyard.

Bojuka Bog occurrence in decks from the last year 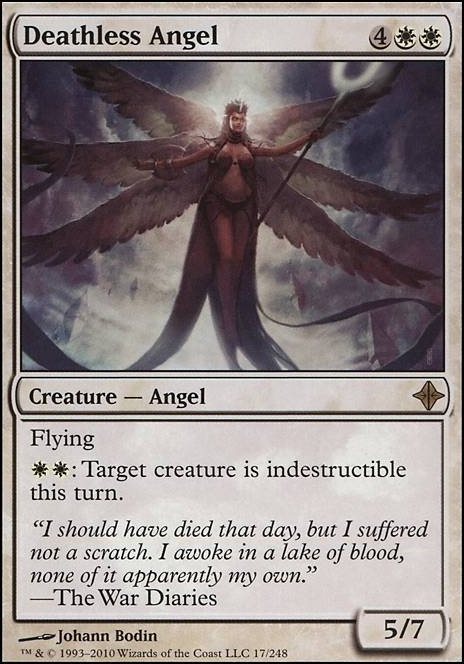 Cool deck!!!
Just my two cents, When you run mill, it is important to run graveyard hate too. Otherwise your opponents playing muldrotha or Kess or the like get a big advantage for free.
Bojuka Bog is great, Nihil Spellbomb is good, Soul-Guide Lantern is good, Scavenger Grounds is a bit extreme but an option.

I love how you can use your land slot ( Bojuka Bog ) as a combo piece. I might try a list with just Bojuka Bog and Fall of the Thran on my own. Thanks for the amazing idea!

Sweet deck!!!
Fauna Shaman seems good, as does Eladamri's Call and Animate Dead .
Given that you spend so much effort getting creatures in your graveyard, seems like you might want to build up to a Living Death . If so then Bojuka Bog is a good idea.
Just some thoughts, cheers and have fun!!!

Looks like fun! What kinds of groups are you playing against? The landbase is always a good place to start, I'd recommend Path of Ancestry over the guildgate and Bojuka Bog / Scavenger Grounds if anyone in your playgroup interacts with graveyards. There's also plenty of great counterspell options out there, Didn't Say Please is strictly better than cancel here, but there's also SwanSong and Drown in the Loch , both of which are pretty powerful in Commander. Removal is also important to consider, there's a bunch of great kill spells that are better than Murder , but they'll depend on your playgroup. Go for the Throat , Price of Fame , Doom Blade , Spark Harvest , Heartless Act , selected based on what kinds of decks you play against. If you're going full zombie-ball, I'd recommend Coat of Arms as a duplicate Door of Destinies . If budget isn't an issue, there's Mikaeus, the Unhallowed , which is a great group-buff and recursion engine, and Patriarch's Bidding , which can give you a huge army really quick, so long as you don't have any other tribal players at the table, but if you keep their graveyards cleaned out it shouldn't be an issue.

Why: Sword is good AF don't get wrong, but the ability to get the lands you need/ want out weights to me the benefits of sword

- Zulaport Cutthroat + Disciple of the Vault

Why: Disciple sees the whole board, and combos with the lotus petal infinite line within the deck itself

Why: Homeward Path will be replacing what functionally im using Shepherd for(defense against other Tergrid decks), secondly Massacre Wurm applies more pressure, is great against token strategies, and has a pressure cooker kind of weight to it in the deck which helps with killing opponents

Why: Defense against other Tergrid Decks, as well as Soul-Guide Lantern does this job better