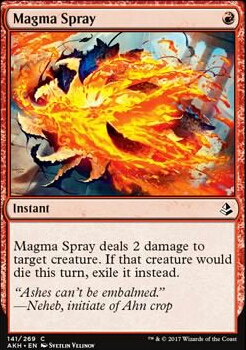 Magma Spray deals 2 damage to target creature. If that creature would be put into a graveyard this turn, remove it from the game instead. 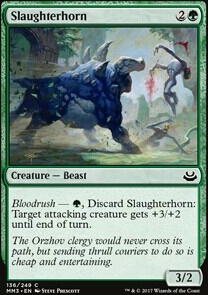 FormOverFunction on I need help choosing another â¦

I think the exile aspect of Magma Spray puts it at the top of the list, assuming its color isnât going to cause trouble.

I still recommend keeping Frost Bite. According to these sites:

About 50% or more of the meta has super important creatures that die to Shock , and the chance to be able to hit a few of the slightly larger creatures is invaluable. If you do cut it, I recommend using Magma Spray instead.

And on removal, you have 8 + Giant. Giant is a beater that is also incidentally removal/card advantage. You can't think of giant as a 2-mana removal spell, because if you do then it's bad. And if you cut bites, you'd have '8' 2-mana removal, and that's not good in an aggro meta. You really need the 1-mana removal, and Frost Bite is the closest thing to Bolt you've got.

Also, removal always feels bad when playtesting without an opponent. That's a fact of the game.

Also I like to run a ton of interaction, and my decks regularly have 8-12 removal spells plus 4-8 cantrip effects. That's my playstyle, and it works for me, so consider running it like that for a few MTGO games or against whoever plays Pioneer in your area before cutting the Frost Bites.

Also, red removal is always bad v control. It's just rarely good. That's why you have the Mystical Disputes in the sideboard -- they make a blue deck's life miserable. Plus, t3f got banned so control decks are on the down low for a while.

If you're cutting cub, Burning-Tree Emissary is amazing. You can go Tree+Stomp, Tree+Lightning, Tree+Brawler, Tree+Refiner, etc. It's just a free 2/2.

StopShot maybe you forgot, but Scorchmark is a direct downgrade to Magma Spray

EDIT: You mentioned this, frick, ok, imma just make a decklist link so I can edit it.

Does anyone mind telling me what happens if I try to search my library and all three of my opponents each own an Opposition Agent?