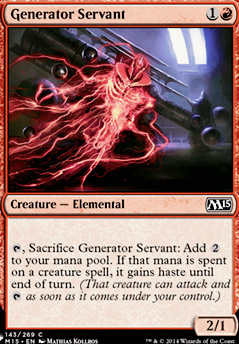 , Sacrifice Generator Servant: Gain . If that mana is spent on a creature spell, it gains haste until end of turn. (That creature can attack and as soon as it comes under your control.)

Generator Servant occurrence in decks from the last year

Whats yours is mine and whats mine is... mine
by zobster 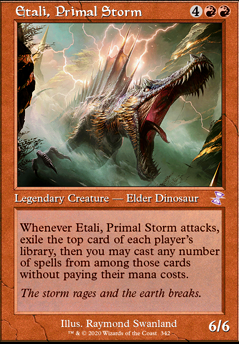 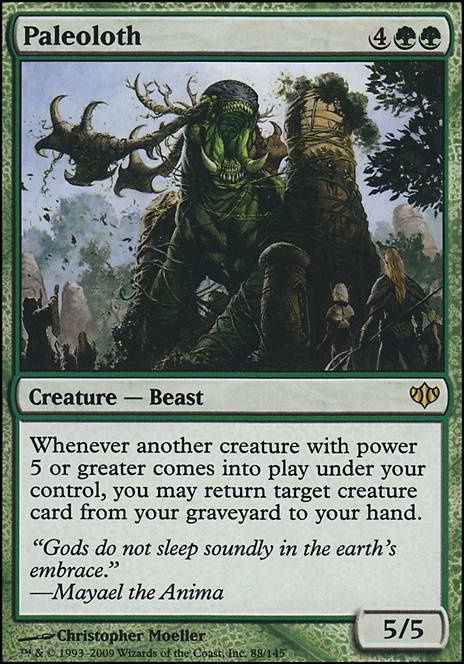 Wait, You Guys Are Getting Turns?
by InfectedGears

Have you considered Generator Servant , Dockside Extortionist , Treasonous Ogre , and Imperial Recruiter for your list? Generator is a great way to accelerate an early Momo, Dockside costs a little $$$ but is worth every penny, and Treasonous is an undervalued way to get HUGE swings of mana very quickly. And Imperial Recruiter can help find Magda, Brazen Outlaw easily... Seems like a great budget deck!

I'd recommend putting a LOT more ramp in here so you can get Narset out sooner. All 3 Signets, all 3 Talismans (i.e. Talisman of Creativity), Arcane Signet, Fellwar Stone, Worn Powerstone, and Basalt Monolith. I'd drop Jeskai Banner though... if it costs but only adds 1 mana it's not worth it. Generator Servant ramps and gives haste (only creature I ran tbh).

Brainstorm and Dream Cache both allow you to get expensive cards from hand to the top of your deck to cast for free.

Spirit Mantle and Steel of the Godhead are both excellent auras here.

Feel free to pick through my list for ideas (it's not budget friendly but there's some cheaper gems to be found). Upvotes on any of my decks are appreciated. Narset, American Beauty

Love the description and I love Archangel Avacyn Â Flip as a card!

Also, I have noticed that there aren't too many ways of triggering Avacyn's flip effect. I do see that there is Selfless Spirit and you could do something with the tokens gained from Hanweir Garrison, but other than that I don't really see many non-Angel creatures dying.

There are a lot of self sacrifice cards that are red or white that can help you get that flip effect off, such as Generator Servant or Benevolent Bodyguard to name a few.

If you really don't care about getting Avacyn's effect off, then ignore this comment.

Heres my Voltron deck that does somewhat the same thing as this deck except it has more of a focus on equipping Avacyn and wrecking everything. Avacyn, the Commander

tacolover25: TBH, I actually did consider using goblins, but... I already have a deck that does that (Nilbog County Postnatal Abortion Clinic) and I like to experiment with new things. I'm actually trying to use Rite of Flame (which I still need to buy some), and Seething Song (which I need to buy more of). And the Vessel is placeholding for them both.

I do like goblins though, so if Generator Servant doesn't work out, then I now have a Plan B. Thanks for your help!