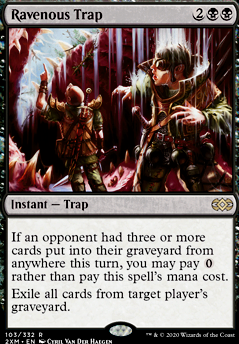 If an opponent had three or more cards put into their graveyard from anywhere this turn, you may pay rather than pay this spell's mana cost.

FisterMantastic Yeah, 4 rips for sure. And couple of Soul-Guide Lanterns or Tormod's Crypt (whatever you like more) if you need more hate should do the trick. I don't think they are that consistent but FYI Ravenous Trap and Crypt Incursion might be fun/interesting SB cards that can also do the trick. Grafdigger's Cage can also stop living end.

If force of negation es a problem a card that I found works surprisingly well and is super fun to play is Mana Tithe. It works the first time at least xD, so I just sideboard it in game 2 and took it out if I had to play game 3. It also works quite well just against the Violent Outburst and the living end itself, since normally they tap out to cast it as soon as possible. No one expects the Spanish Inquisition...I mean, the white counterspell. Not the most consistent thing but a fun one to have in mind at least from time to time.

Yeah, chalice of the void could do the trick pretty nicely, but I feel the same as you. I want it for the side of another deck but man...that kind of money for a sideboard card hurts...

Glad to help! The more people play and test it the more feedback we will have and the better it could become. I am hoping for players better than me to give it a try, hahaha. I just hope most people that try it are at least a bit luckier than you with the matchups, xD.

Blackmail is probably my favorite budget option for 8-Rack (and honestly, I like it better than Thoughtseize in this deck). It's not as strong turn 1, but it doesn't whiff based on card type and it still gives you some choice.

Ravenous Trap is a good budget sideboard option against graveyard decks. (Leyline of the Void isn't too expensive anymore, either, although that is certainly relative.)

antacidbrn your option 1 of playing it as a control deck is certainly the way to go. It has indeed been the case that Mill got a LOT stronger since the printing of Ruin Crab , so don't give up hope on the archetype just yet! As far as the threats you mentioned, i'll give my thoughts:

Our bad matchups include Humans (but its certainly not an auto-lose, and the matchup still feels close), as well as Burn (its a race we often lose, but they also often sideboard wrong so there's hope), but otherwise I'd say we have good-to-great matchups versus most other decks I can think of right now.

If you're wanting me to have a look at your list and help you out versus matchups where you're struggling, let me know (PM me a list). It sounds like your control build was close-to-the-money, but perhaps lacked a bit of interaction and sideboard tech to get you competing well in your lcoal meta.

There are some straightforward options - the 'kill an enchantment' card patched a lot of holes. I've had success with Whip of Erebos and Mimic Vat , Collective Brutality , Raven's Crime , Ravenous Trap , Profane Command and so on, but right now lumimancer looks like its going to be flavour of the month, so 1 mana instant speed removal is the game. Fatal Push , or spice like Human Frailty . If you need to kill somewhat bigger creatures, Dismember does a lot of work answering those 1 drops.

You're correct, yes. Once a card changes zones, it becomes a new object. So you will be able to cast Ravenous Trap for its alternate cost after Walking Ballista has entered the graveyard the third time and in response to the undying trigger.

Let's say an opponent has set up an infinite sacrifice loop with Mikaeus, the Unhallowed. Let's say using Viscera Seer, and Walking Ballista. This will deal infinite damage at the table if uninterrupted, by removing Ballista's +1/+1 counter everytime it's sacrificed to the Seer, and brought back by Mikaeus.

If no other cards have gone to opponents' graveyards this turn, can I cast Ravenous Trap for 0 to exile the Ballista player's graveyard (with an undying trigger on the stack) once it has entered the graveyard three times?

I believe the answer is yes, because I think Ravenous Trap only sees "one card" going to an opponent's graveyard three times that turn, vs. "the same card", because a card becomes a new object when it moves to a new zone, but I've struggled to clarify if this is correct.

I have some more cheaper mill cards if you wanted to cut some of the bigger cards: Glimpse the Unthinkable, Mesmeric Orb, Sphinx's Tutelage, Memory Erosion, Ruin Crab, Bruvac the Grandiloquent (is an all-star, and I pulled one in a Jumpstart pack!), Maddening Cacophony, Archive Trap, Mind Grind and Hedron Crab

There are also some cards to keep graveyard decks off your neck by milling then exiling their yard like: Ravenous Trap, Leyline of the Void, Tormod's Crypt, and Relic of Progenitus

Last but not least, Bitter Ordeal will do some extremely heavy lifting when you mill someone for major cards in a turn. I recently realized that Gravestorm triggers off of any permanent put into any graveyard! That was a big find, and is helpful even with smaller triggers to root through their deck and turn off combo and exile other problematic cards before they are cast.