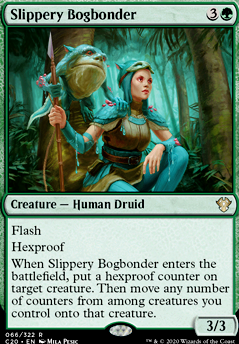 When Slippery Bogbonder enters the battlefield, put a hexproof counter on target creature. Then move any number of counters from among creatures you control onto that creature.

Pattern of Growth
by Coelacanth710

For Once, it's a crying shame Didn't Say Please is mono-blue. Every time I cast it I Go "Uh! Uh! Uuuh! You didn't say the magic word" and wave my finger at my opponent like that screen did to Mr. Arnold.

Other cards you may want to consider are Briber's Purse, Gemstone Mine(since amber is considered a gemstone), Nesting Grounds, Slippery Bogbonder (for Dodgeson) and Tropical Storm. I hope this helps.

You totally got my upvote for this.

Ramos is a really awesome commander. Big giant clockwork dragon that can do any number of things in any number of ways, yep, so cool. I've never built Ramos, just thought about it a few times, but what do you think about having ways to power counters onto Ramos and pay off his mana ability? Things like:

and Slippery Bogbonder can be really good, giving Ramos permeant hexproof, moving all counters to him, adding a counter to Ramos, and also being a counter to removal. Snakeskin Veil can be similar but more limited.

There are a ton more, but I don't know, it's just something I'd been thinking about with Ramos. Looks like an awesome dragony list you have!

Have you considered Emergent Sequence? It's essentially a [Rampant Growth] that turns the basic land into a creature.

Another card you may want to consider is Tomb of the Spirit Dragon. Since lands are colorless cards, once you turn them into creatures, TotSD allows for lifegain. Unless, of course, its like Forbidding Tower or Lair of the Hydra where the ability assigns it a color.

Since you have cards that interact with your graveyard other cards to consider are The Ozolith and Slippery Bogbonder to move around counters.

Have you considered Slippery Bogbonder? Its not a fungus or a saproling, but it will allow you the opportunity to move all your +1/+1 counters on to Slimefoot to go for a win or all your spore counters onto a single fungus.

Another card you may want to consider is Nesting Grounds. It is Slippery Bogbonder but a land, on a much slower speed, and you don't get the hexproof counter. But you can use it to move the hexporoof counter onto another permanent if necessary.

As an amusing bonus Steely Resolve can be used to disable most voltron commanders by choosing their commanders creature type and giving it shroud, if it targets its a no go removing most equip or enchantment options.

Saryth, the Viper's Fang has some nasty potential to turn blocks deadly by tapping your blocker or prevent spot removal on your other creatures.

Slippery Bogbonder has some nasty potential with your commander to make him untargetable to the enemy and massively pump him up for a very ugly surprise depending on the number of +1/+1 counters you have.

Livio, Oathsworn Sentinel is an interesting utility creature able to act as a mana dump later game, triggering your commander and etbs one or more times a turn if hes not on protection duty.

Considering one of your biggest weaknesses is burn may I suggest moving Heroic Intervention to your main deck? Even if you can't defend yourself you can at least buy time for your creatures until they are out of reach of spells such as Lightning Bolt.

Another card you may want to consider is Elixir of Immortality. Not only will the lifegain give you some buffer from burn, but it will also shuffle any cards you discarded from your graveyard back into your library.

If you can find the room, you may wish to consider Slippery Bogbonder. It'll move all +1/+1 counters onto one creature and give it a hexproof counter.