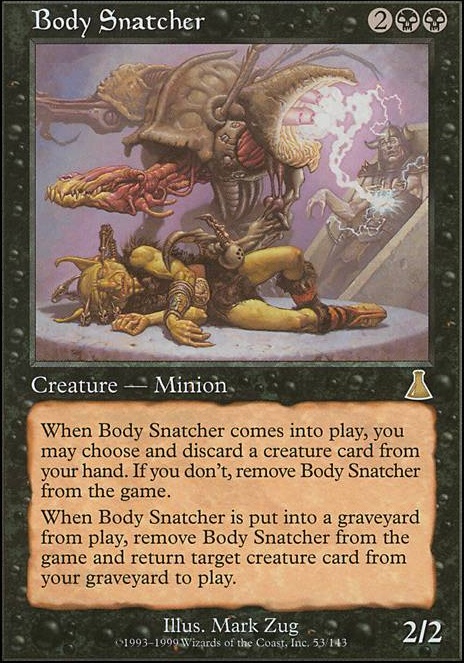 Meren of Clan Combo
by WexAndywn

Who Wants to Get Their Hands Dirty
by saber4734

If you're looking for something more general oriented, Spore Frog Kami of False Hope can shut down combat based decks, and can be frustrated when paired with recursion like Gift of Immortality .

I had a big long response typed out and then realized I didn't understand your question correctly the first time.

Yes, that works. When Body Snatcher dies in your example, both its own ability and the effect created by Saffi Eriksdotter trigger at the same time. Since you control both, you get to decide what order to put them onto the stack.

Body Snatcher won't get exiled from the battlefield when its trigger finally resolves because when it changes zones, it's considered a different object. The trigger that's looking for the Body Snatcher that's supposed to be in the graveyard won't be able to find it on the battlefield.

Can I stack the death triggers so Body Snatcher returns to the battlefield before it is exiled and if I do so does it get exiled after leaving zones. Does it matter if it is in the graveyard after the effects resolution? Does this interaction not work the way I think it does?

I want to end the boardstate with Reveillark and Saffi in play so I can continue my combo with any creature power 2 or less in my graveyard. I know there are better ways to do this but with my board and hand this was the only way I could accomplish this.

Body Snatcher is another good option for a reanimation deck

Yeah banning either one helps a lot, but nobody plays Flash -> Rector seriously, and even if they did it isn't more or less broken than many other combos. Flash for Rector usually means you're pulling Omniscience. Since Yawgmoth's Bargain is banned in the format, you don't really have a good easy line with Rector that doesn't involve more cards in hand. If you Flash -> Omniscience, your combo is actually a 3 card combo as now you have to have an outlet card. Also consider how absurdly low quality Omniscience is outside of comboing, and how having it in your hand makes your combo brick out completely. I know people like to say this is the reason to get Flash over Hulk, but it will see 0 play if Hulk is banned and flash isn't.

Also consider the usefulness of Rector and Flash casually. Rector is a dead draw outside of combo and so is Flash. Hulk decks don't run enough ETB or LTB effects to make casually popping a flash worthwhile, same for enchantments as other outs for Rector. Also consider the commanders. Resolving Flash -> Rector doesn't do much with Thrasios + Tymna. You can't nab an enchantment to give infinite Thrasios activations and draw thru.

I think people really underestimate Hulk for some reason. Every single combo with creatures can be put in the context of flash hulk. Any new speed cards or cheat into play exacerbate the problem. Flash certainly can be problematic for future printings, but realistically Flash combos with one card in a busted way. Hulk has so many different combo options available its pretty ridiculous.