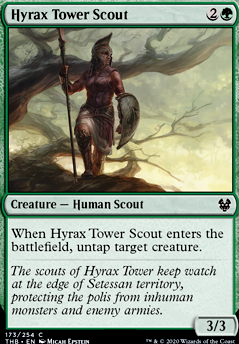 Hyrax Tower Scout occurrence in decks from the last year

This is a really cool deck. I have some suggestions for you:

Rite of Passage is great for Yorvo. And hear me out: You are heavy on Devotion to green. Your commander cares about creatures entering the battlefield. You already included Kogla, the Titan Ape and Karametra's Acolyte. If you add Hyrax Tower Scout, you can make your commander infinitely big:

Control Kogla, Acolyte and Yorvo. Tap Acolyte for a total of 7 . Cast Scout, untap Acolyte. Use Kogla's activated ability to Return Scout to your hand. Rinse and repeat until Yorvo is big enough.

Full and extensive write-up for the last update is coming before the end of the week, but the changes that are for sure coming and already in the list are:

As of now, our girl has a 35% winrate on a sample size of 17 games that are being recorded thanks our wonderful discord community and of course, many, MANY thanks to SynergyBuild.

Full and extensive for the last update is coming before the end of the week, but the changes that are for sure coming and already in the list are:

As of now, our girl has a 35% winrate on a sample size of 17 games that are being recorded thanks our beautiful discord community and of course, many, MANY thanks to SynergyBuild.

In my opinion Explosive Vegetation is not playable in commander. Or any other format lol. Maybe in a lands deck. If you already had all the 2 and 3 mana untapped land spells included.

Have you run this deck in paper? Have you made any changes? I think defensive counter magic should probably be in the deck even in its most casual shell.

Whenever I see simic colors I immediately think of degenerate combos. Infinite mana + Finale of Devastation or Thassa's Oracle lines are my favorite, but I dig the Kiki-Jiki lines.Hyrax Tower Scout Splinter Twin and Combat Celebrant all add to those lines. If you use Intruder Alarm it combos with kiki jiki plus can give you infinite mana with mana dorks like Bloom Tender and Gyre Engineer by bouncing a Shrieking Drake or Dream Stalker kind of like the Ancestral Statue line. If you run Beast Whisperer or Guardian Project or The Great Henge bouncing the Shrieking Drake gets you to a Thassa's Oracle win.