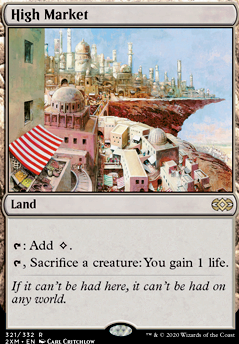 , Sacrifice a creature: You gain 1 life.

High Market occurrence in decks from the last year

Hey, nice version of Atla. Did you make the Atla alter? It's well done.

Two drop land ramp can also achieve this with Farseek, Nature's Lore and Three Visits. Cinder Glade, Canopy Vista, but also Sheltered Thicket, Scattered Groves are land upgrades for the manabase that these land ramp spells can search for. Being able to ramp with a dual land really helps color fixing.

Open the Armory is worth adding because it can tutor for Skullclamp, Greaves or Staff, important cards to have more access too. Some other land upgrades to consider are High Market, Opal Palace, Forge of Heroes, Exotic Orchard, Path of Ancestry, Battlefield Forge. Opal and Forge are to put a +1/+1 counter on Alta that way when you combo with Mirror Entity she doesn't die. Adding these lands especially Market makes Crop Rotation worth adding.

Fuzzlewuzzle I'm glad you keep working on this deck! I'm still working to tighten mine up as well!

Some questions and thoughts:

Hey Jack_83 I used to run Phyrexian Tower but found the decks low land count punished me for running lots of colorless land and have generally found my self not wanting to sacrifice to be able generate black even if it is extra. However, if I boost my land count I would definitely run it then. On second thought I may replace High Market, I might need to rethink my lands a bit.

Looking through your lands:

I would probably not run Witch's Cottage. Seeing as you only have 15 of your lands that are Swamps (12 basics, 1 Urborg, 1 Shockland, 1 Alpha-Dual) to enable the rest of the payoff, the amount of times you can reliably trigger this effect and get something useful out of it, seems to be overshadowed by a tapped land on any other occasion.

You have 6 (7) lands that by themselves only tap for colorless - one is Cabal Coffers and doesn't tap by itself, another is Nykthos that requires a great deal before it starts tapping for colored mana. I would worry to end up with too many non-colored sources, especially since you run with low cost cards with limited generic costs. I would say you don't have enough mass-draw to get proper value out of Reliquary Tower, so I would replace that with a colored source. Personally I would drop Hall of Heliod's Generosity as well, but that's up to your attachment to your selection of enchantments.

I would probably replace some of these with an Evolving Wilds (just for the fixing) and basics. You can also look forward to Vault of Champions. You could consider Temple of Silence. Normally I would suggest High Market as a sac outlet within your lands (and thus seldom removed), but you do have quite a few sac outlets in your deck, so it should be possible to get redundant copies.

I'm a little puzzled why you run the Snow-covered basics... Are there many people in your playgroup that uses Extraplanar Lens? Or is it just an aesthetic thing?

I don't know your playgroup, but I would say you're a little light on interaction. It seems you're mostly focused on doing your thing. So if an opponent is doing their thing better/faster, you have very little means to change that outcome. Just something to consider.

I like the look of the list. With Teysa, you can never have enough sac outlets. Have you considered High Market. The card is only a couple bucks at most and it gives you another means to trigger Teysa's ability. Ob Nixilis, the Hate-Twisted can also be used on your own stuff for triggers and draw.

I noticed both Thought Vessel and Reliquary Tower in the deck. What's your draw line to make these worthwhile. I am not saying they aren't I'm just wondering how often they are dead cards versus the happy Christmas land time where they work out. Draw overall seems really light in the deck and so I'm not sure how often you are filling up so much to need no hand size. That Reliquary Tower could go to High Market and the Thought Vessel to Hell's Caretaker (another sac method) or Hunted Witness (curve lowering trigger for Teysa). If you want it to be a rock of some sort, I would still play Everflowing Chalice first as it also gives you a mana dump or just go with Talisman of Hierarchy.

Do you have a Nightmare Shepherd laying around?