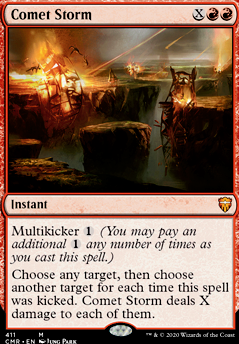 Choose target creature, player, or planeswalker, then choose another target for each time Comet Storm was kicked. Comet Storm deals X damage to each of them.

Dragons, Drive-Bys, and Dwarves
by mrsaggy

Comet Storm seems like a good upgrade over Fireball. As for creatures, why not use stuff like Myr Battlesphere or Siege-Gang Commander since the token tokens will persist. Depending on the amount of single target buff spells oyu want to run, Zada, Hedron Grinder can also be a good option for more a) mass buffing, and b) super cantrip value.

Nice primer! I like your characterization for Rosheen lol.

Have you considered Comet Storm for this?

I like the name of this deck and its D&D thematics. Some first impressions are: