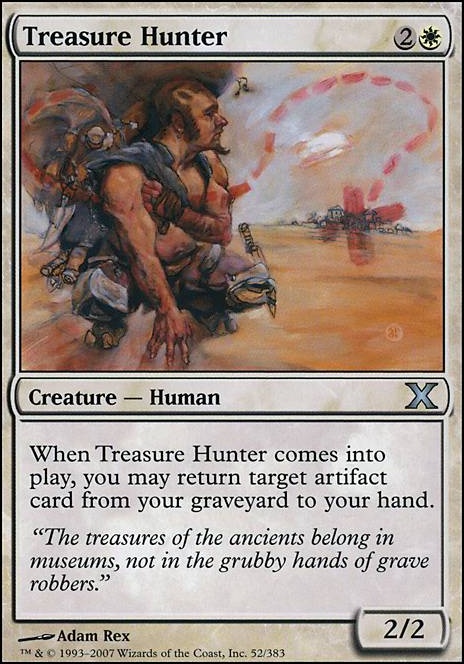 When Treasure Hunter enters the battlefield, you may return target artifact card from your graveyard to your hand.

Treasure Hunter occurrence in decks from the last year

Is there any particular reason Treasure Hunter is in the deck but Trusty Packbeast is in the sideboard?

A Rebirth of Steel (Teshar Primer)

I've been loving Teshar brews. I feel like you're missing out on the infinite combo potential of all of the bounce or recur creatures. For example Treasure Hunter, Glint Hawk, Aviary Mechanic, Emancipation Angel, Kor Skyfisher with a sac outlet and any 0 cmc artifact goes infinite.

Also I feel like Altar of Dementia and Blasting Station deserve a look as additional creature sac outlets.

I don't love Springjack Shepherd because tokens don't count toward devotion. Even though it has an etb it doesn't seem like it would necessarily net you all that many tokens/life (depending on your board state at the time obviously).I'd also maybe consider replacing Treasure Hunter with Open the Vaults for a couple reasons. First, more than half your artifacts can be hit by Sun Titan already. Plus, Open the Vaults returns enchantments as well, something you'd have trouble with outside of, again, Sun Titan. Playing mono-white, it'll benefit you more, on average, than it'll help other players. The consideration I suppose is if some of your artifacts care about their own cast triggers but I doubt it?

Also, and I realize this is more suggestions without removals, you don't have much in the way of non-creature removal. Things like Disenchant or Leave No Trace (especially good in a mono-colored deck because 4 of the options don't touch you). Even Valorous Stance could provide good utility. (I know you might have some creatures that destroy on etb but I'm on my phone so it's hard to check.)

rodsters, you hit it on the money. Since the combo requires you to generate infinite black mana to cast Conspiracy before you can retrieve the infinite rainbow mana piece Gemstone Array, we can't use Arcane Adaptation.

That said, the reason we use Conspiracy over Arcane Adaptation is rooted in my arbitrary obsession with the word Hippogriff. If you replace Razor Hippogriff with Treasure Hunter, you will be able to recur Gemstone Array before casting the card that turns your graveyard into humans.

If you use swap Razor Hippogriff for Treasure Hunter and Conspiracy for Arcane Adaptation, you may replace Xenograft with any tutor or cantrip you wish.