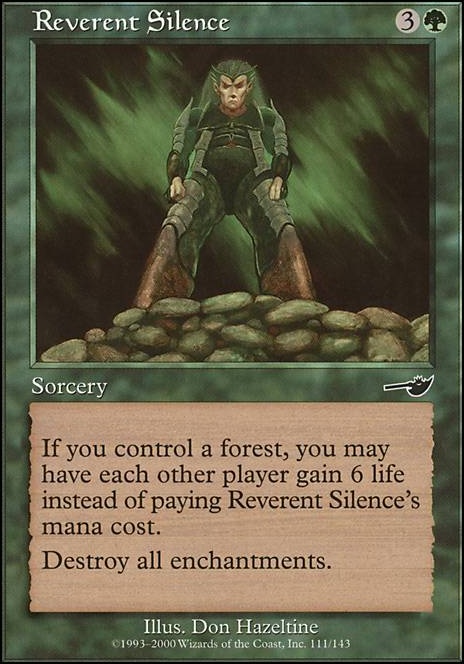 If you control a Forest, you may have each other player gain 6 life rather than pay Reverent Silence's mana cost.

There are 5 creature based board wipes in the deck an 4 of them make tokens. The 4th one is Ezuri's Predation . That card had a very interesting interaction with token doubling. The extra tokens created do not fight.

Anyways enough about that.

Reverent Silence is awesome. The fact that it can be free is soo cool I'm surprised I've never seen it in action or I've never seen it in my searching. What else do you guys got? Oh and DuTogira I've been raving about Portcullis to alot of my friends with super friends decks. That card is so good.

Nerdytimesorwhatever on Are there any old cards â¦

I run the version that just runs a Bayou to cast Reverent Silence for free, but I know the Wear / Tear version is just as viable, so up to you. I will definitely say I recommend the heck out of a Grave Titan in the sideboard. It's a very good option for when you need to play a fairer game post-board because it's pretty easy to hardcast. I also prefer Tidespout Tyrant mainboard over Ashen Rider because it's far more flexible. Just as good against UB reanimator and Sneak&Show, but also fair game against Death and Taxes, Delver, and most other strategies tbh. You lose the ability to hardcast, but I think it more than makes up for it. The games you have to hardcast something are definitely not in your favor anyway!