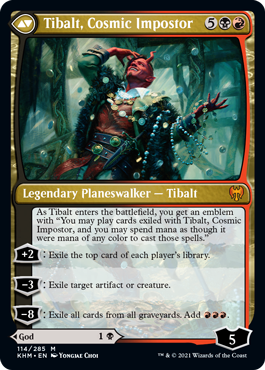 King of the Mill: Sidisi, Brood Tyrant
by giantbug

Whenever Throg, God of Thunder attacks you may discard a card from your hand. If you do, he gets +X/+0 until end of turn where X is that card's mana value.

Whenever you discard a land, Throg, God of Thunder deals 4 damage to any target.

Back during Fate Reforged, we got two cycles of hybrid-activation creatures; Five rares and five mythics. Strangely enough, the rares were Legendary creatures and the mythics were not.

We got; Daghatar the Adamant, Shu Yun, the Silent Tempest, Tasigur, the Golden Fang, Alesha, Who Smiles at Death and Yasova Dragonclaw. For the mythics, we got Soulfire Grand Master, Torrent Elemental, Brutal Hordechief, Shaman of the Great Hunt... and then there's this guy, who breaks the mould.

Make a new mono-, non-legendary MYTHIC creature who has an activation cost that follows the pattern of the other nine.

Fetchlands are absolutely insane. They not only represent perfect mana, but basics for playing around Blood Moon, cards in the grave for things like Delirium, Tarmogoyf, and Delve cards like Tasigur, the Golden Fang or the banned Treasure Cruise; extra Landfall triggers, a deck shuffle(which is less relevant in Modern without Brainstorm but it still does something), and more.

Basically, fetchlands mean that not only is there always a land in grave, so Delirium only requires 3 rather than 4 card types worth of work, and DRS is at least Birds of Paradise, but that many decks that use fetches literally have more mana and more card draw than they would have otherwise.

DRS would be Ragavan . . . but worse, because now three different colors have access to that sort of perfect 1-drop. Jund would become the best color combination with access to eight turn one ramp plays that also present clocks, Lurrus to get them back, Dauthi as a wincon and Bauble as a card draw engine, and just a pile of the best interaction in the colors.

Example deck where it happens

Only around half of your pieces benefit from the cost reduction of Umori; that being the case, it might be better to include the cat oven package, and/or Asmo and Cookbook. Endurance in the mainboard seems pretty medium at best, and Cat would give you more black cards to pitch to Grief . You might also consider Fury if you want to stick with Umori. There's also Bone Shards .

For sideboard: Ingot Chewer and Shriekmaw are both decent choices, Collector Ouphe , Tasigur, the Golden Fang (for long matchups), and Kalitas, Traitor of Ghet .

Small addition: This works the other way around as well - you may, for example, put and/or cards into your Tasigur, the Golden Fang deck

That's a good enough reason I suppose. I've used Monkey Cage in a Tasigur, the Golden Fang deck, but it wasn't really a combo or anything.

Esix, Fractal Bloom and Thieving Amalgam to trigger the cage would be super fun. It isn't infinite, but its very strong.