If a player would draw a card, that player removes that card from the game face up instead.

Each player may play cards he or she removed from the game with Uba Mask this turn.

Uba Mask occurrence in decks from the last year

Vega Finds the Center of the Tootsie-Pop
by Massacar 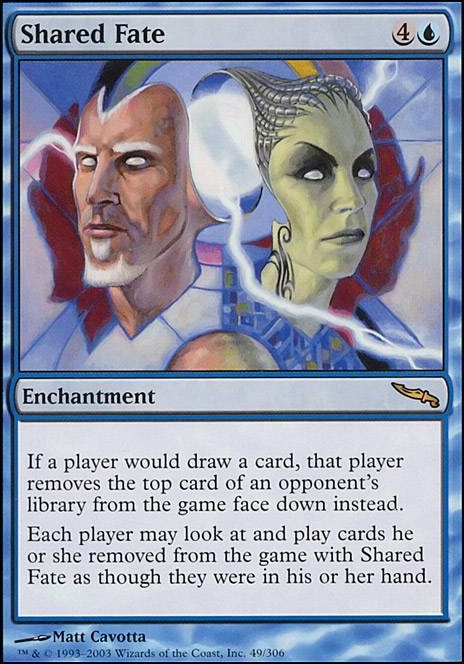 Sure thing Massacar. Uba Mask also just came to mind. Since most of your spells are cheap I think it would be pretty powerful alongside Vega, especially since its effect is mostly beneficial to you but detrimental to opponents.

Shared Fate is similar but might be a little too wonky. Would make for a fun finisher though!

Tomorrow is so neat. Possessed Portal is strong with him (you'll get cards thanks to Tom's replacement effect while your opps won't) though it'd definitely draw hate haha.

All_Bad_Manners that's not a bad shout actually and it's something I might consider, I'll test it out whilst trying out the deck and see how it goes, it also works rather well with Uba Mask if you don't have a Notion Thief or Hullbreacher out since it means they pretty much just exile their new hand and go into top deck mode, sounds promising, thanks for the suggestion!

Hey - thanks for your comment! As I mentioned on the other build, I don't think Tinybones has tier-1 cEDH potential, at least not with existing cards. I usually use this database to keep up to date on the meta. As you can see, both of the mono-B decks are fast combo decks. Since Tinybones is technically part of an infinite-mana combo kill with her activated ability, I think it could be a tier-two or surprise deck, but it's hard to expect it to be very consistent when it has to go shields-down so often; "grindy" is not the color identity of mono-B in cEDH.

Once you add more colors, and none of them are blue, the question you have to ask yourself is: why aren't you just running Nath Stax? (Tinybones is in that list, which I'm happy to see!) In cEDH it's often pretty important to have a combo or combo enabler in your Command zone, and Nath is a one-card Stax wonder. Otherwise you're giving up a free card. Tymna is a pretty powerful enabler, but she doesn't do anything for your discard or lock plan.

My other thought is that, in these colors, there's really no reason to waste slots on The Rack-style wincons when you could just as easily slot in a combo. This Tayam deck might be a good jumping-off point, as it's a three-card combo with one card being your Commander. Or, you can run a Razaketh reanimation combo like this partner deck.

I think it's totally possible to run a stax/hatebear-y deck in these colors, but with cEDH you really should think about a more linear and quicker way to win. Even if you have everyone topdecking, when decks are built around value and combo engines in the command zone, it's hard to truly lock anyone out and you need to be able to take advantage of your position. I'd recommend taking out the Rack and Counters synergies and adding a combo and additional hatebears. Here's a deck that is also basically a list of the good white hatebears for the format. Think carefully about the types of wins you just can't fight through, and add those hatebears to the deck. (Uba Mask + Drannith Magistrate, for example, seems like a good lock combination to include.)

Again, not a cEDH expert, but looking at the competing decks in Abzan and Golgari colors is really helpful when considering what you're trying to do.