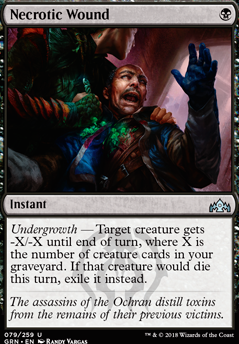 Unergrowth â Target creature gets -X/-X until end of turn, where X is the number of creature cards in your graveyard. If that creature would die this turn, exile it instead.

Gristle your Jimmies
by Asher18 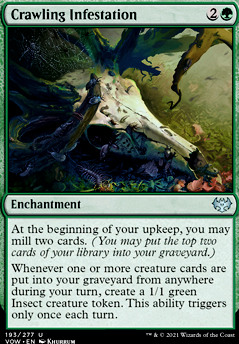 I took out Life from the Loam because it seemed sooomewhat narrow (has an infinite combo with Bone Miser + Discard Outlet), but it's still playable. I've found that Rishkar's Expertise is just too slow, and has the downside of being green (can't be easily cast off Bone Miser or Sacrifice). Ad Nauseam costs less, is black, and can be cast at instant speed (a virtue that I have been neglecting for too long).

Just took out a Buried Alive for K'rrik, Son of Yawgmoth; turns out, casting Hogaak for delve + life makes things a lot easier.

Hmm. Would you enlighten me on combos that Fain provides?

Daemogoth Titan is definitely a good Berserk/Greater Good target. I'm not so sure it's necessary though, Hogaak being our commander (in fact, I'm might take out Rotting Regisaur).

Necrotic Wound might be good in other builds, but I find that my particular build doesn't have a lot of cards in the yard at any moment in time (unless I'm going off).

Actually have this deck built up in paper now,

Any updates? I notice you dropped Life from the Loam and Rishkar's Expertise and replaced with what looks like Ad Nauseam and an extra land?

Anything else? I was kind of debating Fain, the Broker as another sac outlet/combo piece.

Daemogoth Titan seems kinda spicy too, with how aggresive the deck allows us to be with it, due to creature generation, as well as it's synergy with stuff like Stinging Study.

Incarnation Technique and Necrotic Wound seem like they're worth testing too.

Fiend Artisan is a new card that fits well into your deck, as well as Necrotic Wound. also, unless you have a budget or you don't want to be a target in your playgroup, you can add Sheoldred, Whispering One. it will be so effective, but it might draw the ire of your playgroup.

Does anyone mind telling me what happens if I try to search my library and all three of my opponents each own an Opposition Agent?

The curse of the Scarab God