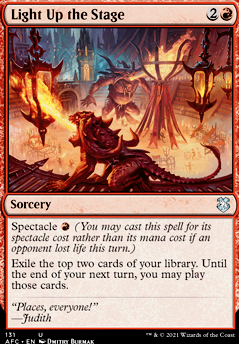 Exile the top two cards of your library. Until the end of your next turn, you may play those cards.

Exile My Heart into Pieces (Prosper) Casual
by RC27

Prosper in Revelry
by 8netherwind8

Light Up the Stage Discussion

I know it's a wall of text but I love Norin and enjoy playing him, albeit, differently than an optimized player like yourself. Please do let me know what you think of each suggestion as I would like to pick your brain about the most brave commander in all of MTG!

Much as I like Light Up the Stage, it doesn't mix well with Thunderous Wrath, because if you get thunderous wrath from light up the stage, you now have to hard cast it or lose it entirely, since it's miracle cost can't be played- That's not a good look. And, as much as I Really Love Thunderous Wrath, that's kind of the problem with it: you can't use it to it's best if you're using card draw (or in this case, card exile). It's a great burn spell, but burn decks need card advantage to keep getting these one shot spells, to hold up pressure on the opponent and eventually win. I found with my burn deck that I had to choose one or the other, and I chose card advantage and a great number of other burn spells (many of which, sadly, aren't as cool).

You say this is Burn -- is this intended to be aggressive? Cause this isn't aggressive.

If you want to go real Burn, the highest mana cost in your deck is 3 and that's because Rift Bolt, Light Up the Stage, and Skewer the Critics disguise themselves as bad.

Is there anything in particular you want to do with the deck? If you want to go more creature heavy there was a 2020 challenger deck called "cavalcade charge" that had really good bones for an aggro direct damage deck. It has a lot of damage options, creature options, and things like Light Up the Stage that are invaluable for this kind of deck. Especially if you need to use bolts on creatures, card draw will always be your Achilles' heel. Though it wouldn't probably play very well with Thunderous Wrath

I don't know, I'm no expert on burn decks for sure. Just figured I'd mention that challenger deck if you wanted to look it up for ideas on what was popular in mono-red recently.

I believe your land count is a hair on the low side. Referencing this nice little article on mana math, linked below , 21 lands has you missing your 3rd land drop like 12-17% of the time. You have tons of 3 drops and some even more expensive spells, so in those games, you're REALLY hurting.

My thought is this: very often, Light Up the Stage is going to be played early to try to find a land drop. I would suggest that you simply replace them with utility lands. 23-24 lands is much more comfortable. More Castle Locthwain, Hive of the Eye Tyrant, or Den of the Bugbear all seem like excellent lands that you'll be happy to draw and keep the curve of your early turns smooth.