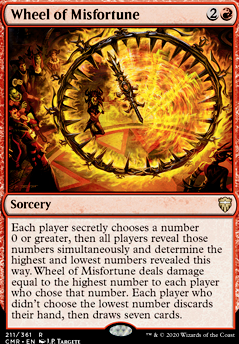 Evelyn is cEDH AF
by Malfiore 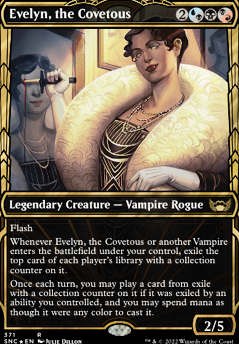 As for your suggestions, I am still running Rancor at the moment. It has hilariously gotten me a win or two with a Birds of Paradise and an extra combat spell. As for the others, I'll keep a few in mind. I've been thinking about Heroic Intervention, as well as Tibalt's Trickery, but for now, I am satisfied with my current spells.

Always appreciate your feedback. Thanks again.

I meant to type Curse of Opulence. Once had a game where me and another player both cast this on an opponent on turn 1.

Boil would be my suggestion. Costly, potential deadcard, you don't need all of the anti-blue redundancy unless blue is prevalent within your meta. Orcish Settlers and Harsh Mentor are also potential cuts. You really want to play cards that ramp you, draw you and promote your game plan. Potential swaps could be Wheel of Misfortune for card draw. I would find cards that add treasure tokens or ramp you such as Sword of the Animist (eventually dockside one day), etc...

Sculpting Steel to copy your mana doublers, ramp or any powerful artifact on the board. Definitely add a bit more artifacts and remove some LD. For example, swapping Price of Progress for Commander's Sphere provides you with draw and ramp rather than potentially being anti-synergistic with blood moon. I think rather penalizing them for utilizing nonbasics via damage, why not go all in on crippling their mana base rather than hurting them a little? Once they can't cast spells, there shouldn't be much resistance, not to mention it's counterbait for blue.

What is your meta like? That can help determine cuts better as well as I don't know what silver bullets you may or may not need.

Thanks to everyone for helping, and these are some really hard choices as with any deck, knowing what to remove is just as important as what to put in the deck, and I have taken suggestions from everyone so far. Trying to keep this deck less than $100 before I purchase it, then go crazy for cocopuffs

carpecanum
Thanks for the suggestion. You have had a fair few suggestions on my decks. I was missing that fetch land. I thought about adding the Explorer's Scope, Slab Hammer and Sword of the Animist equipments, but they do not trigger the commanders effect as they happen on attack phase. So if I do increase the number of land drops it will be in a way that gets triggers.

Profet93
War Room is a great card, and I cant help but put that in despite the price. There is quite a bit of ramp in this deck, and given the lack of problems getting color out what ratios do you think are optimal for ramp? Wheel of Misfortune is a pretty cool card, and I do like it, but im trying to see its nuances in how its played. I am likely going to try to figure out what to swap for it. I normally dont run Solemn Simulacrum given available artifact ramp options, but its definitely good since its land drop ramp.

seshiro_of_the_orochi
I really appreciate you showing me your deck. This has given me a few ideas ive put into the deck. This includes Inferno Titan which is perfect given its price.