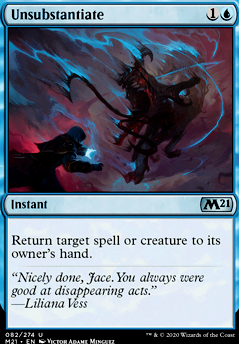 Return target spell or creature to its owner's hand. 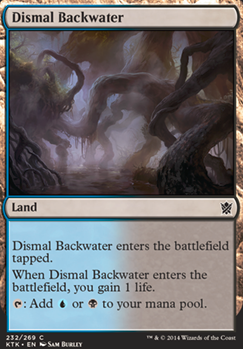 Cards like Unsubstantiate are bad because they are pure card disadvantage. Against spells that can't be countered its better to just let them resolve instead of running bad cards against them.

If you want the deck to be budget, just cut the Force of Negation. 1 copy isn't going to be doing anything the vast majority of the games you play, and its half your deck budget alone.

I highly recommend splashing another color. Blue has good card draw and countermagic, but lacks removal. Splashing red or black would be the best imo. Even though it does make the manabase a little more finicky, it should be fine as long as you don't run any cards with RR or BB mana cost. If you run around 8-12 cheap duals it should be fine.

Black would be for Fatal Push, Inquisition of Kozilek, Drown in the Loch.

Sweet summer child Counterspell is here and this may be the time you spoke of. Lazotep Plating for burn, Unsubstantiate for Abrupt Decay. I'm going to be playtesting Teferi, Time Raveler+Silenceon a scepter.

DragonzBane a big goal of mine with this deck was to keep it as tight as i could while keeping it under $100 while the two shock lands, so Unsubstantiate and Mana Leak were the budget alternatives i had decided to use for Remand and Counterspell . with that being said though, i think those are good changes. drop Glacial Fortress for a Plains to cover some of the cost difference ?

Counterspell is a pretty big upgrade over Mana Leak if you can handle the mana requirements, which I think your deck can. Additionally I think Remand is probably better than Unsubstantiate and does more or less the same thing. I would also recommend going up to 4 copies of Supreme Phantom , perhaps dropping a Vapor Snag for it. I like it!

Blessed Alliance , Supreme Will , and Unsubstantiate could be pretty useful

I wasn't thinking about the drakes with the enchantments. I'll keep working on the balance, bring Reality Shift back in for starters. Here's the deck as I have it right now: Synthetic Polymorph (Talrand)

I'm glad you liked Unsubstantiate . What about Precognition Field ? I know it doesn't make a drake, but it seems really good, at least on paper.