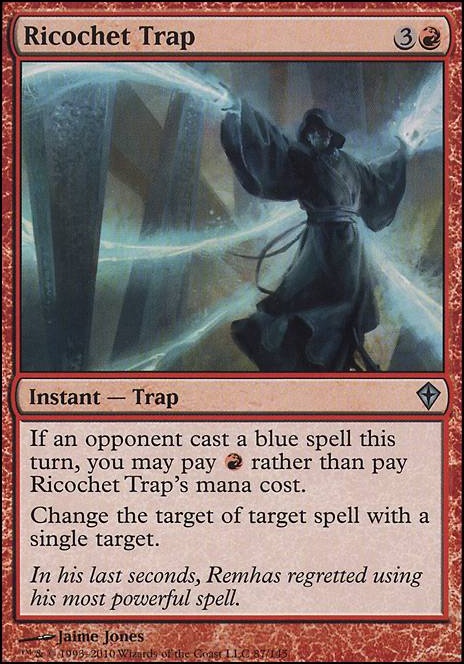 If an opponent cast a blue spell this turn, you may pay {{R}} rather than pay Ricochet Trap's mana cost.

Hmmmm. Are you really ok with all the life loss? If you happen to need to go Fetch Land > Blood Crypt > Faithless Looting > Lotus Petal > Reanimate you lose a ton of life...

I was thinking you could build the "traditional" BR Reanimator but with Emrakul (without Street Wraith, Bauble, Cabal Ritual and Simian Spirit Guide). The traditional version has a 60-80% consistency of a turn1/2 combo already.

If you choose to do so you would have 16 free slots. You could go with 4 Exhume, 4 Collective Brutality for some counterspell protection, 4 other creatures of choice that you like and 4 Thoughtseize.

I'm speaking from the veteran BR Reanimate player perspective that the opponent will usually have something to deal with you. Usually it is Karakas, Innocent Blood, Sudden Edict, Liliana of the Veil or a counterspell or something. Sometimes you can even lose because their creatures alone are faster than you (if you lose 16 life reanimating stuff).

So adding some other options as a "toolbox" could be good. Big beater creatures that mess up their plans are nice.

About the sideboard I was thinking the Wastelands may not be too effective.

If you are worried facing against troublesome Lands deck, I would recommend Magus of the Moon (since you can tutor and reanimate it). For creatures, usually a simple Pyroclasm does the trick. If you want to be fancy there is also Firestorm that may enable your combo.

For interaction you'll usually be worried about opposing Grafdigger's Cage, Leyline of the Void, Rest in Peace, etc. So to counter that you can either splash another color (white/green) or deal with it the same way Mono Black Reanimator deals with it: Ratchet Bomb and Feed the Swarm.

If you see too many counterspells it is always nice to have cheap good old Duress.

I think Engineered explosives was a nice touch. Just as By Force.

I think you can have a more effective 'change the target' effect with Ricochet Trap with all the blue in Legacy.

Blast Zone is interesting, but with so much Wasteland in the format it becomes unusable quite often.

I don't know what decks you are playing against and maybe it already works just fine in your meta/playgroup...

But I'm a BR Reanimator player of 6-8 years with it and I wanted to give some insights :V

Grids without Simians may not be the best anymore. Against UW and the like, maybe here cutting chalices for 4 Guttural Response , or Ricochet Trap fits better now.

First, can I state the the conversation is about Hybrid, not or . Those should not be used in any argument, because all three are vastly different. For example, something with in its cost is definitely a Green card. It was built to be a green effect on a green card that had a weird casting cost to help some players out when their mana is weird. Additionally, Dismember is 100% a black card.

And can I say that I absolutely hate the "slippery slope" argument, especially in Magic. It's entirely irrelevant. It isn't even capable of holding water.

Now, the Hybrid mana thing is weird. The design of the mechanic allows mono-colored decks to use effects that are supposed to be 2-color. Technically, you can also use them in 2-color decks that don't line up, like Nightveil Specter in a deck, but that puts a lot of strain on your manabase and I don't recommend it.

The problem comes down to, do we actually want some of these cards in certain monocolor decks? Looking through the cards, most of them wouldn't even be played in commander. And honestly, oh no mono blue gets Overbeing of Myth is not all that scary. There's a couple minor pie stretches and breaks that would happen, but for the most part very few of the cards are playable and very few of them actually change much about what the mono color decks already have access to.

The only cards I can see actually being crazy are Guttural Response , which is a third member of green's Autumn's Veil and Veil of Summer package and another anti-counterspell in red's gang of Red Elemental Blast , Pyroblast , Ricochet Trap .... etc. Or maybe Vexing Shusher ? Hmmm, well . . . no. Again, red and green on their own are perfectly capable of saying "screw you blue" without either of those cards.

Or Waves of Aggression in mono white? Oh, wait . . . most mono white lists are stax or janky creature mcSlappies. And them getting one Extra Combat effect is honestly meh. It wouldn't break anything. Honestly, I don't even think it's all that powerful.

The impact of making such a change is so small that, for those campaigning for the change, it is entirely an ideological victory. The impact is quite literally restricted to "now I have to explain why I'm allowed to run this card". Which honestly is no worse than having to explain some of your more complicated turns to newer players. Which I have to do all the time.

RambIe on Redirect in EDH?

Example: As enpc & SynergyBuild Both suggested Misdirection which is no doubt the best value you can find for this function in blue.
any situation you could cast Misdirection you could also cast Force of Will , or Redirect vs Counterspell
as were in reds Deflecting Swat the runners up would be Bolt Bend & Ricochet Trap making the choice cut n dry

but like you said "Situationally might be better than a counterspell" the answer is yes there are some situations were redirect would out perform counter spells, key words there are "some" as most red players will testify most situations redirect spells sit as a dead card in your hand were a counter would have been the answer.

You can say coincidence, haha. I was working on Rog/Tevesh since Commander Legends released, but hadn't mentioned it to anyone... Mons and I talked on doing Tibalt, with him sharing thoughts on the list from inception to it's subsequent release (while planning for our Play Test). We never shared release dates for our content, so it was a pleasant surprise to see Rakdos get so much love in one week. I have not seen the final version of his list, but can tell you that there isn't a better deck for playing Peer into the Abyss or Ad Nauseam than what I've developed here. Again, that's not me just talking, that's because of the Legendaries I have at the helm. Nothing in Rakdos will: accelerate or draw as effectively then this pairing. There's a reason I put "better" in the title of my decks. This deck is aimed at the aforementioned goal, so any bonding of separate strategies - or inclusion of Burnout and Warping Wail before Ricochet Trap or Imp's Mischief (just looked at the deck) - will not serve to help this deck's aim. If you want a no bullshit, balls to the wall, ready to win now deck in Rakdos this is the one.

RambIe on My hell is mono-red

burn decks fail short in edh because 9 out of 10 times you will blow your hand out before ending the game
so if you want to actually get anywhere with a mono red edh deck, you will need to focus on and build around its weaknesses
so 1st i would suggest focusing on a commander that will assist with card vantage or at the very least load up on wheel mechanics that will let you pull 7 cards when you have 0 left in hand or do both. both would be good
2nd load up on copy spells that can target spells you don't control and redirect spells that will also target abilities. these can be used offensively or defensibly "don't be the typical Red Elemental Blast and underestimate the value of cards like Ricochet Trap which can also steal targeted draw spells or target player takes extra turn spells"
last but definitely not least id suggest to take full advantage of reds damage multipliers & anti damage prevention mechanics "ive been known to kill players with a lightning bolts using combos like Insult / Injury & Increasing Vengeance"

good luck, and i hope this helps