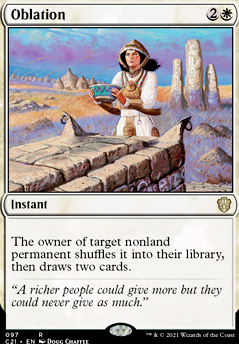 The owner of target nonland permanent shuffles it into their library, then draws two cards.

Rampant Lifegain with Mangara, The Diplomat

Cards I've removed as they were upgraded or didn't perform well

Since this is a new deck and a work in progress, I am going to post a large maybeboard here of cards that I will likely try out.