Alibou and the Battlebots: an Artifact Aggro Deck
by OB_47

Paint It Black
by Azdranax 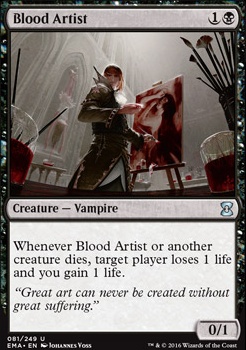 I absolutely love stax. Death and Taxes got me into Magic, especially Mother of Runes. My first deck featured Gideon's Lawkeeper, which remains among my favorite cards, along side Mom, Ghost Quarter, and Thalia, Guardian of Thraben.

I mean, my favorite and oldest deck is a Selvala, Explorer Returned deck which is about playing the fewest lands possible and trying to make everyone else play with as many lands as I am. I mean, what's the purpose of Hokori, Dust Drinker other than to untap your Lotus Field?

Each player may only activate one loyalty ability per turn.

I love that what each of us loves about magic is different and want to continue this:

Let's see a card which excites you!

I've play-tested this a few times and its main problems is its speed. In seven out of ten games, I could not do anything useful until turn 5. To improve on this, I would definitely include Chromatic Lantern, for similar reasons you've already included Prismatic Omen and Dryad of the Ilysian Grove. Also, I would replace some of the cards in your deck with some more ramp spells or land-fetching of whatever sort. Some more opportunities for card-advantage would also really help out. I'm thinking Phyrexian Arena, Rhystic Study or something similar.

I should also point out that Jodah is instrumental in your strategy (at least in the early-mid game, until you have something on the board that allows you to cascade for free), but you've not included any protection for him. In my play-group, this guy is a primary target as soon as he hits the battlefield. So stuff like Lightning Greaves, Swiftfoot Boots, Mother of Runes or other cheap stuff like it would be highly recommended too.

Hope the deck works out for you.

I feel like Kyler is going to be a removal magnet. I'd definitely recommend stuff like Mother of Runes, Giver of Runes and other effects like Lightning Greaves and Alpha Authority or something. Since he has access to green, recasting him probably won't be too hard but I think some protection would help a lot.

I'd also recommend Rally the Ranks, Shared Triumph and Obelisk of Urd, but since Kyler has a built in anthem, these seem kinda redundant...