Pay 2 life: Surveil 2. (Look at the top two cards of your library, then put any number of them into your graveyard and the rest on top of your library in any order.) 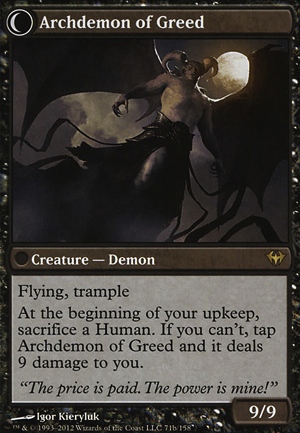 Looks like pretty sweet deck!
Some cards I think that could help here aswell:
Vilis, Broker of Blood - a bit mana expensive, but should be totally worth the card draw from life loss.
Doom Whisperer - another big demon just for that could help to filter your library and drain your life at the same time at instant speed.
Dream Devourer - Im still trying to play around this little guy, but so far its not bad to protect some combo pieces to cast them later.
Emergence Zone - In my opinion this is pretty sweet utility land just to give your spels Flash until end of turn, possibly sneaking out Repay in Kind, etc (?).
Marshland Bloodcaster - probably a bit slow without Haste, but should work just well.

I am not sure your build interacts well with other decks. Putting infinite combos in a deck that runs a high curve can make short games feel bad for your group. Itâs really easy to pull off and IMO should stay in the high power only section of Elder Dragon Highlander decks. If you keep it in here, you should fully commit and lighten your curve a lot. You can make it incredibly efficient in terms of card sustainability and compete in a high powered meta. If you take out Demonic Consultation , you can keep oracle in and try and win with her ability because you self milled yourself well. I also think youâd be able to roll w/ drake + Deadeye Navigator combo, itâs nowhere near as feel bad as fish combo.

I would also take out your 9 drop and commit to a better removal spell, even if itâs blue.

I also recommend adding the surveil demon guy so you can fill your grave yard quick. Doom Whisperer

If you want to make it stronger it will need to upgrade Underworld Connections for Rhystic Study .

I am actually working on one of these builds, gonna make it strong but keep combos away. I think Araumi is capable of doing great things.