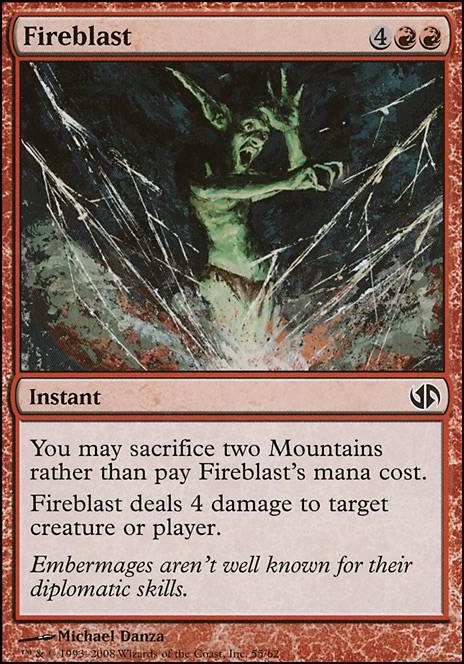 You may sacrifice two Mountains rather than pay Fireblast's mana cost.

Fireblast occurrence in decks from the last year 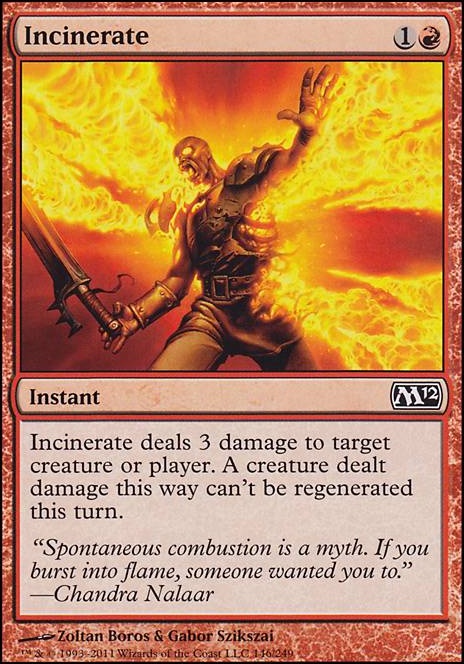 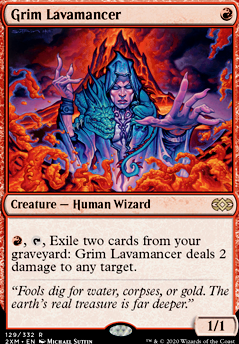 Lightning Bolt is a Good EDH Card
by Rexbolt

Have you considered adding Kird Ape? I know it doesn't have a ton of synergy with the madness theme, but it's overall a very strong creature. I would probably cut Temur Battle Rage if I were you because most of your creatures are going to be winning in combat anyway, plus you have Lightning Bolt and Fireblast for those final points of damage. But overall, I really like your deck!

What do we think of this one? Although we already have Klothys, God of Destiny, this at least is a lot closer to Sulfuric Vortex that we can play in modern. In legacy, this punishes diamonds, petals, FoW, and Daze players. However, it's a nonbo with Fireblast.

How about this one? I initially thought the drawback was huge but someone in another forum pointed out that this triggers Searing Blaze repeatedly. That this makes up for it?

Well met, doughty traveler, and hereupon we must joust! You entreated my presence, and thence thou shalt be remunerated. I shall be oppugning your deck most perfidiously, yet you must fend off my awesome advice!

Well, I have an artifact build of my own, thus I may be leastway some aid. (See Mr. Scarecrow)

In your deck updates you mentioned cutting Mystic Remora, but I find this card to be amazing whenever it is upon the field. Do you know how many decks run all creatures? Only those obsessed with Umori. Four mana is a severe tax, as this oft draws four or five cards or entirely ends the opponents' plans, merely due to them being afeard of you drawing too many cards.

Come on. Only 33 lands?! (Mine has 25.) I'd actually go down a few. Expedition Map can serve as a land-in-disguise, and Traveler's Amulet, as with Wanderer's Twig, each serve more late-game value just by being artifacts.

Go do your homework, young 'un. Should you not be studying for Tolaria West? This tutors for all sorts of trangams. Need defense for a combo? Pact of Negation! Wish to murder everything? Walking Ballista it shall be. It can also find an Inventors' Fair to find an artifact, and may stomp upon those foul graveyard players with a Tormod's Crypt.

So, let me teach you the glory of Academy Ruins, for you see, person, it is probably just better than Buried Ruin. It is repeatable and gets back all of those fun combo pieces if it must.

Dispatch is spicy, Swords is just better. Now, as much as I love spicy cards, I find it difficult to justify them when there is just a better option, in this case one that is unconditional. Dispatch may be active turn one on a good day, two or three on a normal day, but Swords to Plowshares is always ready.

Prepared for some bromidic options? Ichor Wellspring draws a lot, being one of the primary engines in my deck. Krark-Clan Ironworks ends the game upon resolution. Thirst for Knowledge is always solid, stocking the bin and sculpting the hand. If you can get ahold of one, Daddy-o does bloody everything.

Semblance Anvil, I choose you! I use fireblast! PokÃ©mon aside, this casts the entirety of your hand. That cost reduction is no joke.

Now, upon my spicy choices:

I have said afore and I shall say once more, if the deck bears Dimir, you run Unfulfilled Desires. It goes through SO MANY CARDS. It lets you be mana efficient for those bloody turns where you have three just lying about and being indolent, whereat you may filter through three cards instead. This mayn't be card advantage, but it is amazing. Mana-flooded? Lovely! Mana-screwed? Still great! It is better than it reads, and it reads most meritoriously. Oh, and it's cheap, too. My card store had thirteen lazing within their shelves.

Turn Aside is fun, but have you seen the splendid Hindering Light? Of course you have, yet it draws a card, and therefrom I find reason enow to see to its inclusion. Only if you want, but it feels great.

Now, I much enjoy Supreme Will, for it leastwise cycles but may act as a lacking counterspell. Impulse goes in all of my blue decks, for it evermore pulls its weight. Moreover, I am rather fond of Painful Truths, as it draws quite a few cards withal much efficacy.

There are a sparse few things I would foredo.

Spellbook doesn't do anything. If you're drawing enough to be above seven, you should be winning the game instead of maintaining your hand. Call it clemency.

Scheming Symmetry gives the opponent a Pulverize. I am not fond of this card, though the political aspects are enticing.

I'm sure you don't wish to do so, but there are always banal options. Demonic Tutor, Vampiric Tutor, Storm Crow, Vedalken Archmage, stuff of that ilk, but I shan't instill tedium by such suggestions.

May all luck have you!

Discussing payment, you must see my lovely Hazezon. Thank you very much.

Some neat choices that I agree aren't staple in most decks, but still it looks fairly decent.

One thing bothers me though: Why are you running 4x Arid Mesa with no Plains in your deck? Even w/o Plains it could still be a viable strategy were you to have something like a Landfall ability in here, but I don't see one of those either.

Wouldn't swapping those for 4 more Basic Mountains just increase your fodder for Fireblast and such? I'm lost as to their purpose here.