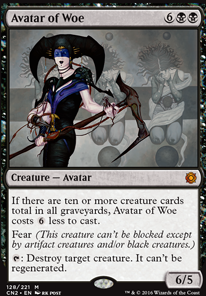 If there are ten or more creature cards total in all graveyards, Avatar of Woe costs less to cast.

dbpunk on Why Are Empress Galina and â¦

For Tsabo you have Isochron Scepter and any 2 or 1 mana instant kill spell at 2, you can use Magus of the Abyss, etc. Hell for the same effect nearly exactly, you have Avatar of Woe, which is usually a two drop when you cast it.

For Gallina, literally anything that lets you take control of a creature will do it. Theres plenty of spells that let you steal a creature without paying , and for her mana cost exactly and 1 less power you can use Beguiler of Wills.

It's pretty good for a first attempt, and I do agree that you need more creatures. The nice part about your commander is that he's probably going to be one the battlefield the whole game and you can rely on having that effect. I think you'd be happier with Teferi, Temporal Archmage instead of jace. I think Tree of Perdition, Wight of Precinct Six, Avatar of Woe, The Haunt of Hightower are spicy includes for creatures.

Bounty Hunter fits into this deck perfectly. Avatar of Woe can also do some serious work and come down fairly cheap. Viridian Longbow is the perfect weapon for your commander. Anyways, you're off to a great start +1.

Tsabo is cute, but 7 mana is a lot for a card that is really only a commander killer. Especially since Avatar of Woe is just outright better on its ability.

Generally at this kind of mana, you want cards that are going to have a big impact on the game and Tsabo just doesn't do that.

As is said, it's cute, but I don't think I would call it a forgotten gem. It's just not played because it's not that good.