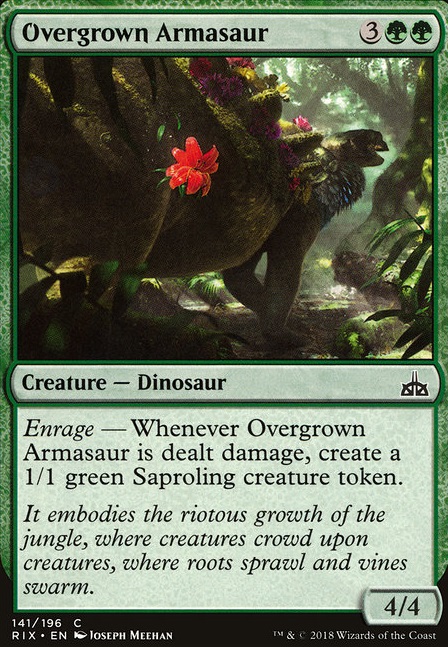 Overgrown Armasaur occurrence in decks from the last year

Out Bellowing Aegisaur - Low-impact dino. Doesn't actually combo with Marath. It replaces the counter you spent to ping it, but doesn't actually put you ahead

Vigor - As with the Bellowing Aegisaur , doesn't actually let Marath go up on counters

Anger of the Gods - If I'm pulling back on the enrage theme, do I need this?

In Basilisk Collar - It's back. See my prior comment

Avenger of Zendikar - Big token producer, even if not directly on theme

Runic Armasaur - A new toy. Let's see how it does

Chord of Calling - It's a combo deck, so now I can tutor for what I need, like Ivy Lane Denizen

Other things I don't have but which I'm considering: Anointed Procession and Growing Rites of Itlimoc  Flip

Some cards of possible interest that shouldn't break the bank:

Hammer of Purphoros Haste is good and extra lands become attackers if needed.

Artifact Mutation Turn their artifacts into your attackers.

Fanning the Flames Something to do with all of that mana.

Overgrown Armasaur can produce more bodies to generate more attack mana. Thundering Spineback is a mana sink that makes more bodies and Forerunner of the Empire will fetch either or Ghalta plus ding the Armasaur to make a saproling. There may be other dinos that fit in here and most aren't expensive.

Inferno Titan has a firebreathing mana sink plus can help clear the way so all of your attackers actually connect more often. Warmonger Hellkite is even less expensive to buy and gives your whole team firebreathing. You have to attack every turn but you should be wanting to do that anyway.

Gruul Guildgate and Gruul Turf are dirt cheap. Sheltered Thicket is a budget dual that Wood Elves can go fetch. Cinder Glade does the same but might be just over what you're looking to spend. Raging Ravine might also be right at that budget line but produces both your colors early and attacks when you have the mana mid to late, getting bigger each attack. Myriad Landscape , Evolving Wilds and Terramorphic Expanse can fetch the appropriate color, thin your deck and create a shuffle effect if needed.

If you happen to have Heroic Intervention I would recommend adding it but it is definitely more than what you've indicated your budget per card is.

I understand that you are posting a deck based on cards you have so that means some cards are acting as filler. When you get a chance I would suggest cutting:

Cards I would suggest adding:

If you need to make more room for some of these card suggestions then you might want to trim copies of Deathbloom Thallid because of how much removal right now is exile based.

If you want to compare a deck idea you can view my ideas for saps I have 2 different deck ideas B/G: Dom Fungal Sap and W/G: W/G Saps.

You are a very prolific brewer. I like this commander.

That's some of my reflexions. You have plenty of possibilities with this commander :)