+1: Until your next turn, creatures you control get +1/+0 and gain lifelink.

-2: Put a 2/2 black Vampire creature token with flying onto the battlefield.

-6: You get an emblem with "At the beginning of each opponent's upkeep, that player sacrifices a creature." 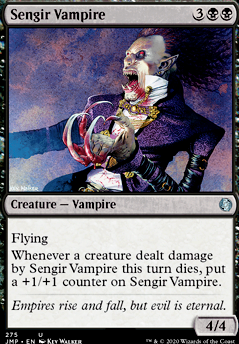 Skymarcher Aspirant could definitely replace Duskborne Skymarcher here (or run both). He's just here to give me an evasive 1 drop.

Vampire Nighthawk and Nighthawk Scavenger are both in the list now. I like flyers, especially ones that trade up... or better yet deter attacks.

Bloodlord of Vaasgoth probably isn't necessary but the deck is built as more of a midrange aggro deck than full tilt aggro. I was happy with the card personally. I don't see too much spot removal but rather a LOT of wraths... thus me running 4 different anti-wrath cards.

Olivia Voldaren is gone now. Sangromancer is here to be a flyer and to offset a lot of self inflicted life loss. Again, a bit of a meta call because he was triggered frequently.

Sorin, Solemn Visitor definitely deserves the spot over Sorin Imperious Bloodlord here. Bloodlord's +1 only effects 1 creature, his minus is just Lightning helix with a forced sac, and his ult wants fatty vamps which the deck runs sparingly. Solemn Visitor's +1 is 'until your next turn' so it's insanely good with Reconnaissance and gains massive amounts of life, deters attacks, or they forget about it and immediately regret attacking. Other than making the occasionally needed 2/2 flyer that's all he does here.

As far as my 2 drop rocks go, you could attempt this deck without them but I wouldn't recommend it. This really is more of a midrange aggro strategy but it worked really well in my meta. This is the rare Edgar list that doesn't mind a game going to 20+ turns.

abby315 on What's your favorite card?

Bloodbraid Elf. But I also hold a very special place in my heart for Siege Rhino. Rhino plus Sorin, Solemn Visitor won me the first prerelease I ever played, so Sorin is a pet card, too!

Destroyerbirb on What's your favorite card?

Mine is Sorin, Solemn Visitor.

Destroyerbirb on What are some under-rated or â¦

For example, Sorin, Solemn Visitor is my pick for an under-rated planeswalker. This Sorin is much stronger than people think. It's a token producer, a "short-term anthem" that lasts longer that most "short-term anthems", and a game ending card in one. It saw a lot of play during standard of it's time, and modern soon after that, but no longer sees as much play. It's good in pretty much every deck, from fast aggro or token decks, to control decks, even to janky life gain decks!

Now, Narset, Parter of Veils is over-rated. It's a worse Anticipate-on-a-stick, and has a static ability that's not important in a lot of matches. It only gets worse the longer it is on the field.