Choose a creature type. Reveal cards from the top of your library until you reveal X creature cards of the chosen type, where X is the number of creatures you control of that type. Put those cards onto the battlefield, then shuffle the rest of the revealed cards into your library. 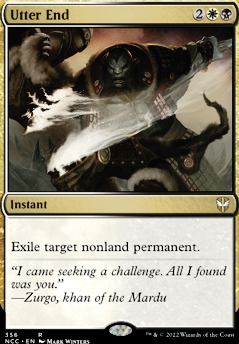 garrukhunter98 - Damn. Kindred Summons does sound pretty awesome. The steep mana curve and dependence on having an existing board state made me skip over it in the past but maybe I should try to find room for it after all. Making room is the tough part ;)

thefiresoflurve - Totally true that a number of the Ally ETB effects don't benefit from Panharmonicon but I think it's still worth it for the ones that do benefit from it. Especially the Allies that drain life, mill cards, kill creatures, kill artifacts or make my opponents discard - these are the ones I commonly tutor for with Tazri and they all benefit a lot from Panharmonicon. As for the duplicates, there's only one copy of each card in the deck. I've just listed them under multiple categories when they fill multiple roles (eg. it's an Ally, and I want to keep count of how many of those I have, but it's also part of my Ramp package). If you sort the deck by card type, you can see that there are no duplicates other than Basic lands.

I find that Kindred Summons works really well with allies. Let's say you have 8 Allies out with one of them being Hagra Diabolist or with it being one of the creatures you hit, you will get 8 etb triggers, all dealing 16 damage. Kindred Summons has got to be by far the best card in my Allies deck because it either wins the game or gives insanely good value with even a couple Allies on board.

Maybe you can get some inspiration with my golgari elves deck. Itâs fast af and if not stopped early enough, it will overrun. Often a boardwipe is not enough, because it can rebuild fast.

At first glance Beastmaster Ascension, Kindred Summons, Return of the Wildspeaker, Elvish Warmaster and Realmwalker could be some nice additions in your deck.

In addition, the coloured mana is mostly greenâ¦ so swapping 3 Swamps for forests could smooth out your mana-base.

But I'd advise you to put in some more/better card draw.

God-Eternal Kefnet doesn't add cards to your hand, same for The Locust God.

Keranos, God of Storms isn't guaranteed to draw you cards and Kindred Summons won't work when you are behind on board.

With 5c you can just slot in whatever you feel fits, but with 33 creatures something like Beast Whisperer should do the trick. Since most of your gods are enchantments as well you could also go the enchantress route with Eidolon of Blossoms or Enchantress's Presence and things like that.

@seshiro_of_the_orochi thank you for the suggestions! Kindred Summons was something I was considering when building the deck, but thought the cost was a bit high as the creatures are already expensive, so usually I don't have a ton of creatures out at once. Realmwalker is interesting, I might play around with it, but as it doesn't buff, draw cards, or protect (though playing cards off the top would be cool) it likely won't make it in. Silkguard however is one I've never even seen before and should absolutely be in here~ thank you so much for pointing it out! have to figure out what to swap out for it though

This looks solid in terms of a lot of its ramp and support pieces. Have you thought about any creature cheat pieces like Elvish Piper, Belbe's Portal, Quicksilver Amulet, or Dragon Arch? Some of these could absolutely help cheat out those big dinos. I also think Kindred Summons and Genesis Wave could be powerful here, especially with the mana you have from Mirari's Wake and the like.