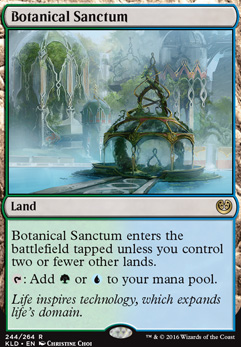 Botanical Sanctum enters the battlefield tapped unless you control two or fewer other lands.

Vorel of the Hull Clade EDH
by Daanson 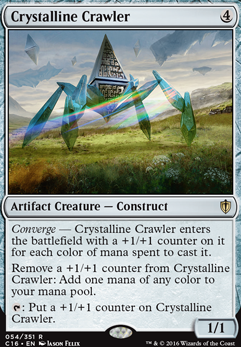 Competitive all the way

I would honestly take out 2 Snakeskin Veil for 2 Distortion Strike , then replace the last 1 for a full playset of Blossoming Defense . You've got plenty of better hexproof options with Vines of Vastwood and Blossoming Defense . Infect is all about killing your opponent by turn 3. If you give them enough time to get blockers out, it won't matter anymore, so the bigger pump spells are better. If you ever get fetchlands for the deck, you can add Dryad Arbor for a fetch target that can help you survive sacrifice effects. Since Infect is such a fast deck, a pretty budget land you can run is Botanical Sanctum . It'll do wonders for your manabase.

Hey, I would suggest adding a Simic Growth Chamber instead of Botanical Sanctum . Infinite card draw with aesi or tatyova. I also added a Cloudstone Curio because it enables infinite loops with kodama triggers