Whenever another nontoken creature dies (is put into the graveyard from the battlefield), you may draw a card.

Kaervek the Merciless
by flocklab

+1 Nice list, love the name. Some suggestions if I may:

It's imperative to get Kaalia out as soon as possible and start swinging. That being said I would suggest removing all of your three mana and higher rocks for two mana rocks. Smothering Tithe is a great card, but it's slow in a Kaalia build and is always a lightning rod for removal. I recently pulled it from my own list and haven't missed it since.

Seems like you have plenty of angels/ dragons/ demons to maybe not run out of gas, but I have to wonder with only 4 draw spells? Maybe the amount of tutors you have can help make up for this? Either way, I would recommend adding more draw spells to keep the hand full.

A couple of these are in you maybeboard, but some cards you might wanna try: Nykthos, Shrine to Nyx / Burning-Rune Demon / Necropotence / Syphon Mind / Harvester of Souls / Robe of Stars / Darksteel Plate / Serra's Emissary / Whispersilk Cloak / Teferi's Protection / Strionic Resonator.

Feel free to take a look at my Kaalia build on my page if your interested. Always love seeing another Kaalia build. Cheers.

This is a very nice Kaalia of the Vast build. Quite possibly one of the best I've seen on the site actually. Well done. I notice quite a few similarities with my own build Fear, Faith, and Fury. I think the only difference really being mine is possibly a bit more defensive while yours is a bit more offensive.

I played a game last night where I was able to steal an opponents Bolas's Citadel with my Hellkite Tyrant and then proceeded to win the game with it because I already had my own Necropotence in play. Great combo those two. Now begins the painstaking process of deciding what to cut from my list to add a Bolas's Citadel.

A couple cards you're running I've been wanting to playtest myself (Liesa, Forgotten Archangel / Lyra Dawnbringer / Sower of Discord / Utvara Hellkite) how's your experience been with these? Have you found them to be worth a slot in the deck?

Now some recommendations if I may... you seem to be running quite a few cards that will protect Kaalia of the Vast, but one vital one your missing is Robe of Stars. This is essentially a repeatable Teferi's Protection specially for your commander, and with the amount of ramp cards you have, shouldn't ever be an issue to activate. Seems like you may be somewhat lacking in card draw (personal preference probably, I tend to run more than most ppl), but some additions you might like Harvester of Souls / Indulgent Tormentor / Syphon Mind / The Immortal Sun. I also noticed in a previous comment you removed some extra combat spells, but some nice extra combat on a stick would come in the form of Scourge of the Throne.

Apologies for the long comment, this is just one of my all time favorite commanders, so I get excited whenever I see another great list. Again, very well done. Cheers

Kresh from the Top Ropes

Hey goldlion , please excuse the much belated reply. This deck has been a little amorphous over the years, I had initially added a whole bunch of anti control with steal and fling elements but I found that it couldn't remove threats or reset the board quite so easily and would draw the ire of control players leaving the others at the table to get too unmanageable. By swapping the anti control to a recursion engine with repeatable sac outlets it made the deck play a whole lot more aggressively and, had the added bonus of more removal to get around these shortcomings.

One thing that might surprise you is that there are a number of draw spells that gel in to the main strategy and although I did have both Grim Haruspex and Harvester of Souls I found that they were a bit underwhelming if you are doing powerbombs from the top ropes. Greater Good is an all star in this deck as it can capitalise off a single giant creature, or multiple tokens that get the etb buff from Ogre Battledriver and In the Web of War . Rishkar's Expertise is another all star with a huge Kresh as the cast trigger let's you effectively cascade.

This deck ran Vicious Shadows which is an excellent card but because it and Purphoros, God of the Forge don't work off the creatures power or toughness it ended up not working quite so neatly. If I had a few more token generators it would be doable. Carrion does seem like a great card for that reason and I do have a Rite of the Raging Storm to add but I just never get around to it haha.

Thanks for mentioning the Cauldron Dance . I had loved the card when I first saw it (in like 2014 or so, before it's recent reprints), so I kind of built Kresh with it specifically in mind. I think it is so much value for 6 mana and at instant speed no less. Have used it to eat up two big attackers by dropping in even fatter bombs (which triggered Warstorm Surge and killed another player much to the horror of everyone else). There are a bunch of changes to make to this deck list so I will update it soon

I also went back and forth between Grim Haruspex and Harvester of Souls. For now Iâve gone back to the demon.

Looks like a fun deck to play :) I agree with KaptnK that more card draw would be good, a lot of what you've got in there adds to your graveyard (thrill of possibility) but doesn't actually net you cards in hand. To add to the suggestions they made, consider Skeletal Scrying, you might end up with a decent number of land cards in your yard. I'd also take a look at Ambition's Cost, Corpse Augur and Harvester of Souls.

I disagree with KaptnK about your mana, though :) Counting more than just rocks, I think I see 12 pieces of ramp and 38 lands in the deck, and I approve. I think commander is a format that requires you to get to a higher mana count more consistently than most other formats (which lend themselves to shorter games), and I generally see more card draw as the solution to having a large part of your deck being focused on mana rather than decreasing this share. It'll let you get not just mana on board, but also cards to use this mana with. And the fact that you rummage pretty well helps out too.

Unfortunately I've yet to play a reanimate deck, so I can't give you input there. 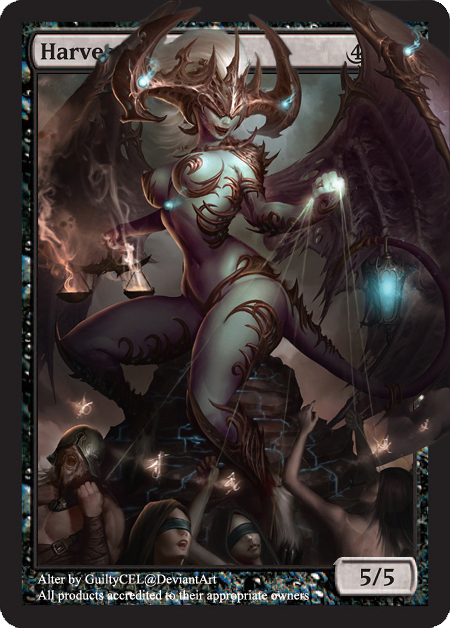 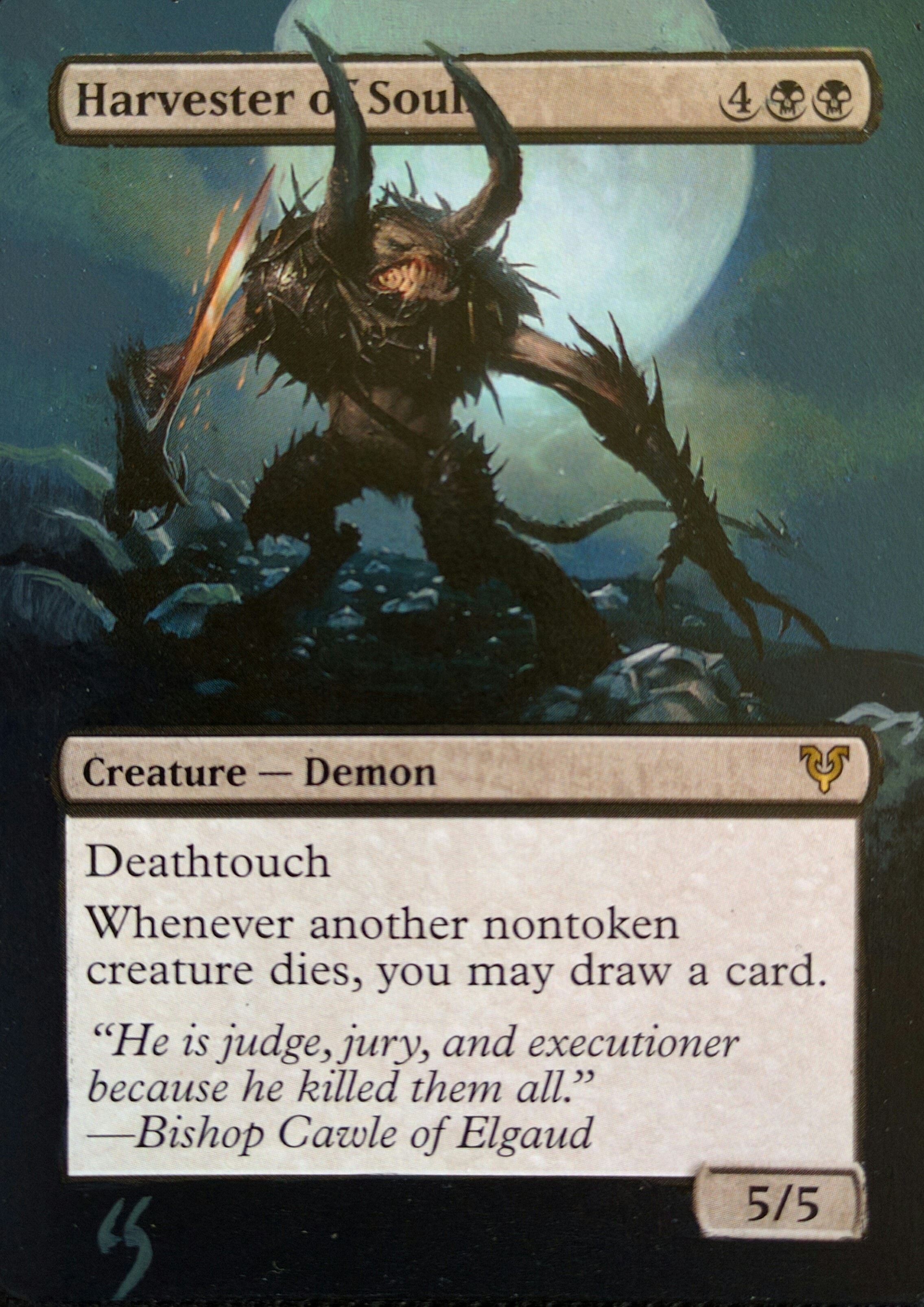 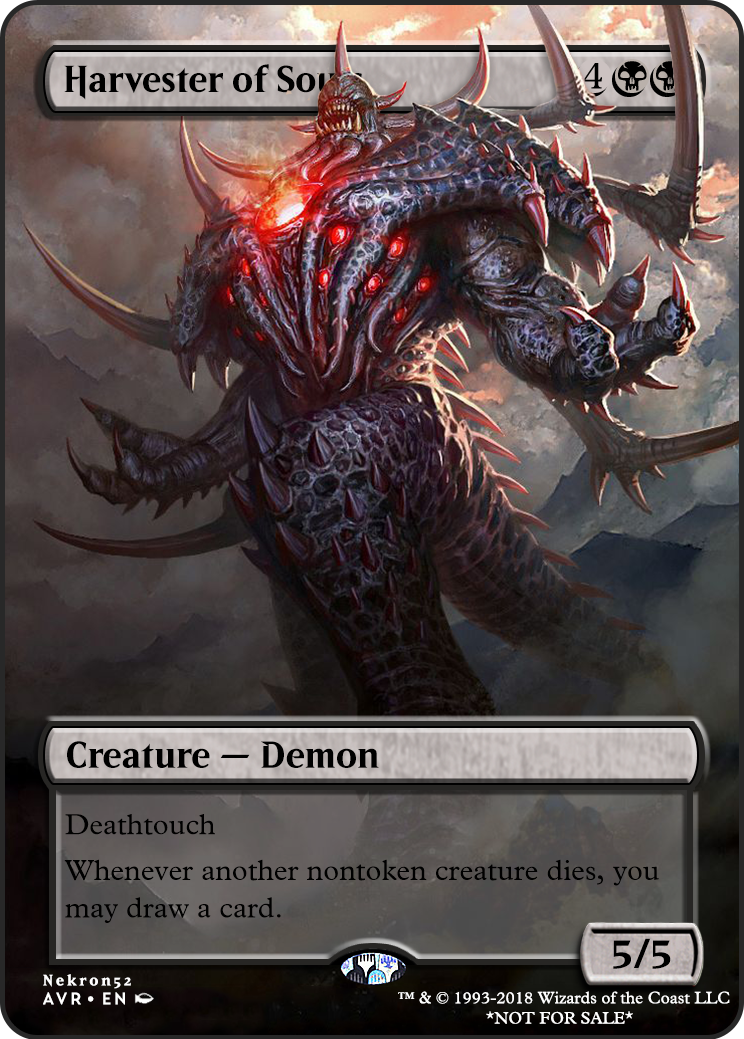 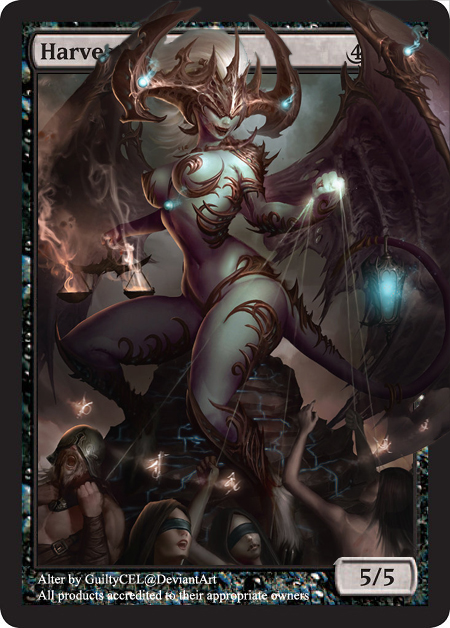