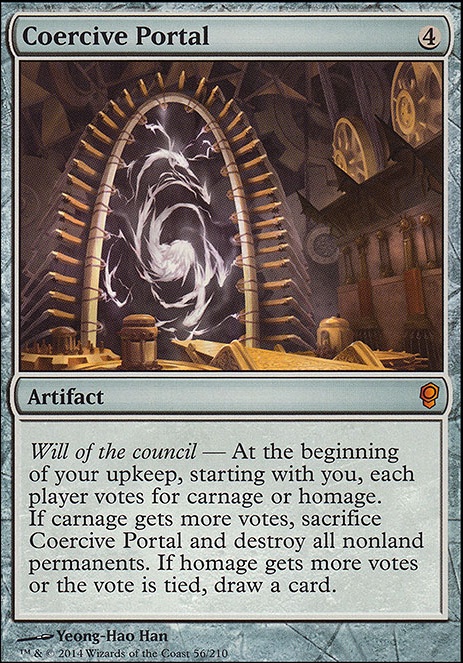 Will of the council â At the beginning of your upkeep, starting with you, each player votes for carnage or homage. If carnage gets more votes, sacrifice Coercive Portal and destroy all nonland permanents. If homage gets more votes or the vote is tied, draw a card.

Will Of The Council!
by SacriFace

Just wondering, do you want to have a subtheme of giving opponents choices? I see you have fact or fiction but also stuff like Temporal Extortion, Killing Wave, Pain's Reward, Do or Die, Curse of the Cabal, Desecration Demon, Coercive Portal etc.

Lanzo493 now Coalition Relic is a direct upgrade to Tooth of Ramos. I made the swap. Your suggestions have all worked out very nicely. DeinoStinkus thank you for the suggestions, those are decent options I'll consider them. My only gripe about them it's their cost, I don't run a way to cheat artifacts into play and if I'm going all in for one of those options I'll likely not have enough for a good board wipe that turn, potentially giving my opponents time to upset my combo. Thank you for noticing Soulscour though, it's a very evil board wipe that hits lands. Massacar I appreciate you taking the time to come up with some good suggestions. Ravnica at War is honestly a bit too narrow for me, most of the real staple commander cards are actually mono-colored, I did consider it but chose more pure wrath effects over it. Coercive Portal is actually very decent and I'll consider it, the only thing I don't like is giving your opponents the choice, out can make this a dead card sometimes. Endless Horizons is decent and I'll have to find some room for it. As per the graveyard hate, while I do run against a few graveyard decks I find that if I can just board wipe them away every turn then they're wasting resources trying to bring cards back and I'm usually getting 2 for 1 value on their cards, there's a few effects like Grave Pact and Living End that this deck can't overcome, and I'll look into your suggestions there as a way to combat that

Ravnica at War could be a useful asymmetrical wipe.

Coercive Portal is a cool card that gives you either draw or a boardwipe.

Endless Horizons gives you the double bonus of clearing lands out of your deck so you don't get dead draws, while making sure you'll have mana to play every turn.

Grafdigger's Cage to keep the grave locked away, especially if you're playing against someone like Muldrotha.

Rest in Peace for the same reasons and Grafdigger's.

If you're interested you can find my own take on this style of deck here:Avacyn, Angel of Wrath

Overall this seems like a good start! The lack of Toxic Deluge bothers me (it's certainly better than Coercive Portal), and I might try playing some targeted graveyard hate. I know that sounds counterintuitive, but it lets you remove uninteresting creatures from graveyard to Tariel's ability only hits the best options. You could also try running mill effects such as Altar of the Brood and Mesmeric Orb to fill up graveyards quickly. Necromancy is another copy of Animate Dead, and the new Dredge the Mire might be a good inclusion!