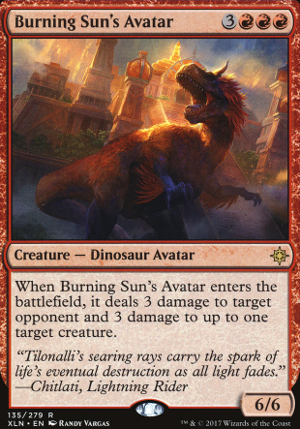 When Burning Sun's Avatar enters the battlefield, it deals 3 damage to target opponent and 3 damage to up to one target creature.

You Won't Like It When These Dinos Get Angry
by Bergy1296

DO THE METEOR MASH- DINO TRIBAL
by Alleria-14

If you replace darksteel colossus with any shuffledrazi, you could add Burning Sun's Avatar as a replacement for purphoros to win directly with your combos without needing purphoros

Which Came First: the Timmy or the Egg? [PRIMER]

Thank you for outlining those other combos Pikobyte! You are exactly right. I actually didn't even realize one of those combos is thing. Great suggestions! While I want to stay away from eldrazi titans, I have included Burning Sun's Avatar, because that is right on theme for what I am looking for in this.

Great suggestion all around! :D

You could add 4 different infinite combos here that win you the game on the spot by abusing atlas ability. All you need is either Purphoros, God of the Forge or Burning Sun's Avatar in the deck, an eldrazi Titan to reshuffle your grave and these combos.