Whenever a Land enters the battlefield under your control, investigate. (Put a colourles Clue artifact token onto the battleifled with ", Sacrifice this artifact: Draw a card.")

Whenever you sacrifice a Clue, put a +1/+1 counter on Tireless Tracker. 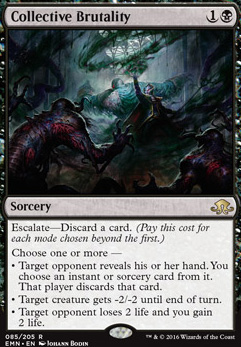 Max and Lucas
by primaloverlord_ 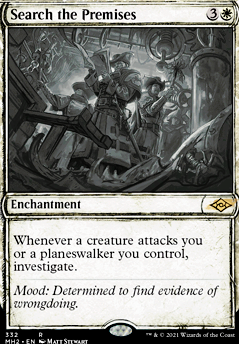 Shamanic Revelation is a good way to refuel you hand after playing out a bunch of creatures and tokens. If you end up adding more ways of pumping your creatures then it might also gain you a fair bit of life. The big issue with the spell though is that a tribal deck often really needs to draw cards after being hit with a board wipe, and having an empty board is when Shamanic Revelation is at its worst. If you are able to cast it right after dumping most of your hand then the payoff can be pretty big, but if you don't have at least 3 creatures out then it's not really worth paying the 5 mana. At least having Sigarda in your command zone gives you a way of putting some creatures back on the board after a wipe so Shamanic Revelation can quickly become a viable play again.

Harmonize doesn't draw as many cards but at least it's consistent regardless of board state. Beast Whisperer is generally worth the cost to buy it for the extra draw power that it adds to decks. Guardian Project is also great but the cost to buy a copy is uncomfortably high, but Tireless Tracker is slightly more affordable. The card Welcoming Vampire that is in the Crimson Vow set is another nice draw engine that White is getting, and Sigarda's ability to create tokens on other people's turns helps to make the most of the vampire's ability.

If you ever end up pushing the deck towards more of a +1/1 counter theme, then Armorcraft Judge and Inspiring Call might be worth looking at. If you focus more on producing tokens then there's Voice of Many.

Lol great deck name. Personally I would make these changes:

The above changes would lower your mana curve while retaining the game plan. Also, they allow for a combo: crab + scout/ranger + retreat + growth chamber = infinite mill. The additional draw effects would make it easier to set up the combo

Symph0nyS0ldier that sideboard seems very playble. Ashiok, Dream Render is definitely better than Leonin Arbiter as it doesn't impact your ability to fetch your lands too. And overall the land count isn't a huge deal, especially not with your curve as low as it is. 22 lands can still get Tireless Tracker pretty big, as long as you can consistently get him out and keep him out.

The only thing I would have a concern about with that sideboard is to make sure you learn the meta of where you're gonna be playing the most and make adjustments as need be. Some decks may be more prominent in your meta than they are in mine or anyone else's so just bear that in mind. Like depending on which decks you see most often you might want more of some of those cards, less of others, or even some different cards entirely. I would say that dredge is a very popular deck in modern and worth sideboarding against. You mentioned Rest in Peace earlier. I would probably take out one Damping Sphere and one Ashiok, Dream Render to make space for a couple copies of Rest in Peace. Especially if you think you're going to go up against any kind of graveyard deck. But other than that, it seems very solid to me.