Herald of the Pantheon

Whenever you cast an enchantment spell, you gain 1 life. 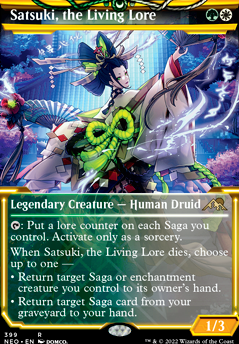 atroxknight So, as of right now the primary win condition is draining through Sanctum of Stone Fangs, and so far in testing it has been really strong. generally to get to a high shrine count, i will wait to play it until i have at least like maybe 10 shrines out in play. before that point I have a few sources of life gain that are pretty significant like Herald of the Pantheon, Sythis, Harvest's Hand, and Honden of Cleansing Fire. I really like including Havoc Festival as a backup to Erebos, God of the Dead if I find I am going against a deck that uses life gain as one of it's main engines (example would be Celestial Mantle).

Dovescape is kind of a gem in this deck, I think, because we have 2 cool ways to play into it while we stax our opponents. For instance Destiny Spinner completely negates the effect for us, and also we can play our stuff and let it get countered, then just recur it with Go-Shintai of Life's Origin.

With that being said, Havoc festival is kind of a dead card if we are falling behind on life and resources, but then again so would erebos. I haven't had an issue with either in my games so far, but I will definitely keep that in mind.

zapyourtumor I thought about Herald of the Pantheon but in the end i preferred Fertile Ground and Wolfwillow Haven as 2 mana ramp spells, simply because they are enchantments so they are never actually dead cards, while Herald is totally dead if I draw it late.

Setessan Champion has been my choice for a 3 mana Eidolon, I like it better than the Satyr because it grows.

Destiny Spinner is a cheap enchantment that is also an alternative wincon if needed.

My very first deck was kitchen table modern selesnya enchantment lifegain, so I'm partial to this kind of build.

I suggest a playet of Herald of the Pantheon just because it helps speed up the deck a ton. Satyr Enchanter is 3 mana Eidolon of Blossoms . Also, 1x Starfield of Nyx is really fun. Destiny Spinner feels like more of a sideboard card, and I think more Runed Halo / On Thin Ice would be good (requires snow lands though of course).

Looks like a super fun, casual deck! Nice brew, though I would cut back on the creature count to make room for more enchantments. Kruphix, God of Horizons, Satyr Enchanter, Herald of the Pantheon, Alseid of Life's Bounty, and Nylea's Colossus are all good cards, but they're either redundant or are goodstuff cards that have other enchantment applications (Though you may want to consider cutting other, as the cards mentioned are powerhouses. Just a couple suggestions). Good build, I like where it's headed 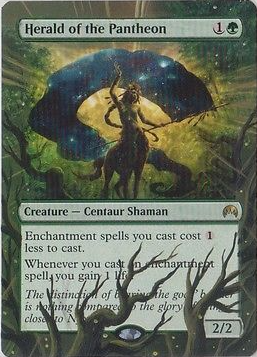