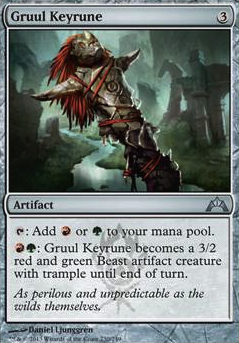 : Gruul Keyrune becomes a 3/2 red and green Beast artifact creature with trample until end of turn. 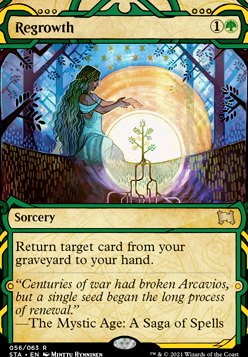 Rhadamanthus on Does card:Gruul Keyrune get returned â¦

It returns to the battlefield with a -1/-1 counter.

Persist is a type of "leaves the battlefield" triggered ability. LTB triggers use information from the last moment an object was on the battlefield to determine if and how they trigger. At the last moment Gruul Keyrune was on the battlefield in your example, it was a creature with no -1/-1 counters on it, so persist triggers. The detailed rules for persist don't include a check on whether the creature that died is an actual creature card, so it can bring back a non-creature permanent card from the graveyard. There aren't any rules restricting +/- counters from being put onto non-creatures, so the -1/-1 counter gets placed as the Keyrune enters the battlefield (and will affect the P/T if you turn it into a creature again later).

I am wondering what the ruling is on non-creatures being turned into creature by an effect or an ability, given persist then dying. Does the permanent stay in the graveyard or does it get returned to the battlefield?

The example I have given is Gruul Keyrune , which has the ability to be turned into a creature until end of turn. Once it is a creature it can then be targeted by Cauldron of Souls to give it persist. If it would die, I would expect it to revert to a non-creature artifact. Thing is, I don't know if that would stop it from being returned to the battlefield or not.

All help and info is much appreciated. Hope you can answer my question and help me understand why it would or wouldn't be return. Thank you for your time.

This list is a little hard to evaluate run together as one long alpha'd offering. Would be easier to figure out if there is enough ramp, removal, etc. if broken into card types or custom categories [enablers, ramp, etc.]

A couple of things that I would suggest:

Fellwar Stone is going to be better than a mana rock like Gruul Keyrune . Its cheaper to cast so you're ramping sooner and it will likely give you access to more colors of mana.

Glorybringer comes out hasty and brings some additional removal if needed.