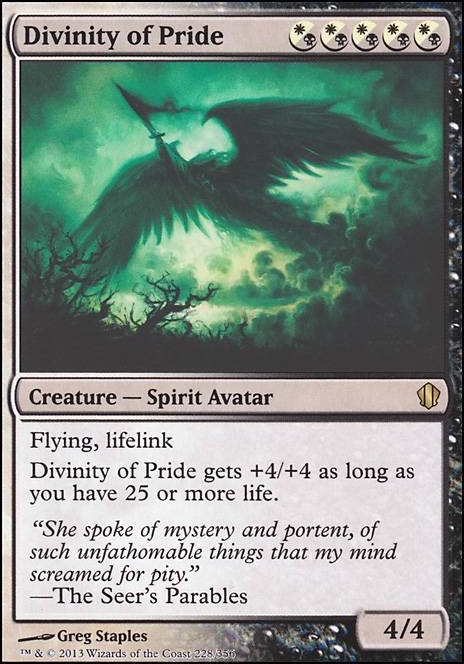 Gaining and Draining
by LtDandy

I had that land in my original list! It certainly sparked my imagination, but I ended up cutting it because I was running Divinity of Pride and wanted to have very few lands that tapped for colorless mana. I didn't get to use its ability however, and you're right I do think it's worth playtesting with some more.

sora719, Hi again! I'm so glad you've been keeping up with the deck since the start!

Funnily enough, 3 of the 4 suggestions you made I've been silently questioning myself over as well.

To get Vilis, Broker of Blood out of the way, assuming we use the same 8 mana for Debt to the Deathless, that IS a gain 24 life and a drain of 8 per opponent. As of now, I consider that a worthy value and will make the change.

I've done the math for Divinity of Pride and Archangel of Thune, and assuming I only have the given creature and Liesa out, DoP has more lifegain for the first 3 turns of combat. After that, AoT has the better lifegain rate, as it increases every turn. Notably, I have 17 possible ways to gain life in the deck, so it's likely I could make AoT buff even faster. My only worry is that a growing board/ growing Liesa will incentivise my opponents to kill it/her more than DoP ever would.

However Archangel of Thune is my favorite angel (after mistress Liesa of course), so I'm inclined to use it. Given the fact that it also isn't as color restrictive as DoP, I'll go ahead and make the change.

I have more than enough copies of Erebos, God of the Dead laying around, and the indestructible creature makes it very versatile, so I'll make that change too.

Finally, Heliod's Intervention. I did originally have it in the maybe board, but I couldn't find a slot for it. Anyone who's seen my Karametra, God of Harvests deck knows I love me some enchantment and artifact removal. That being said, I'm still not sure what I would remove for it.

I'll add it back to the maybe board, and hope I grow tired of some other card so I can make the switch.

Thank you so much for the comment and help!

Hello again man. First talking about the Vilis, Broker of Blood,I think he is a bit expensive for what we try to do, with all the other draw itÂ´s a bit redundant, and he canÂ´t be cheated from hand or GV.

Personally I donÂ´t run him in my list for the same reason I cut Archfiend of Despair. Debt to the Deathless is good for the deck. Having at least one big X drain spell.

Second, I know Divinity of Pride is awesome and thicc, but I could easily replace him for something like Archangel of Thune, same cost and can make herself and Liesa really big. Even Vona, Butcher of Magan has more utility and impact but I havenÂ´t tested it enough.

Lastly the easiest one, Tainted Remedy is super narrow, powerful in some tables but in general meh.Erebos, God of the Dead seems way better as it is indestructible and preventing them for gaining life is the most important part of the card. The card draw itÂ´s just the extra and itÂ´s wonderful,because it balances the card draw if you cut Vilis.

If I may say another recommendation, I run HeliodÂ´s intervention on nearly every white deck I own, just amazing value, and the second part of the card is sweet in this deck.

Cool deck! But there is something you should know; Divinity of Pride is illegal on mono white commander decks since it has black hybrid symbols in his cost, even though you can just spend white on it.

Vault of the Archangel would be a good add if you plan to go wide. For planeswalkers, the B/W Sorins are usually a good fit for token decks, just pick what you feel is fit. Additional sac engines are usually good for Teysa such as Phyrexian Altar and Ashnod's Altar it gives you free sacs with mana which just snowballs out of control especially with a skullclamp or a pitiless plunderer out. If you want further removal, Dictate of Erebos is a must for a deck like this. Martyr's Bond is a bit expensive to cast but has an overall better effect. If you really want to focus on "death" triggers, add more zulaport-like cards such as Blood Artist, Falkenrath Noble, Vindictive Vampire. Divinity of Pride seems out of place and doesn't really do the deck any good. You're deck will be too slow and inconsistent you need to up your mana rocks to around 8-12 to ensure to at least draw it in your opening hand or to at least have two in the early game asap to get you going. I also see no early draw engine or draw cards so maybe you could try cards such as Altar's Reap for cheap draw and sac trigger in one.

Don't know why it didn't catch this but I'm pretty sure Privileged Position counts as green too, and Divinity of Pride also counts as black, and therefor can't be in this deck. Other than that looks like a fun deck