Whenever a Swamp enters the battlefield under your control, choose one â

Toshiro, Please the Graveyard
by UnShiftedmayhem 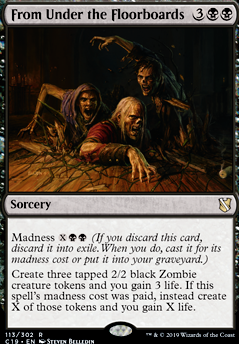 Nice build! As someone who plays Mono-black in Legacy though I would strongly advocate using at least two Leechridden Swamps as part of your draining land package though, it can't be overstated how useful being able to keep activating it if you flood out is. Might also be worth considering more discard - I know you've got Vicious Rumours but knowing what the opponent has in hand is key, especially when you don't have the impulse draw/looting mono-red uses as card advantage. Doesn't have to be a pricy Thoughtseize to strip counterspells and Castle Locthwain might do work ensuring you keep ahead too. Agree with Dread Presence being a beast, could even consider Gray Merchant of Asphodel if you don't mind that being draining rather than burn. Finally just a thought but how about sideboard Pestilent Spirit as a way to remove creatures using Sorin's Thirst or whatever?

How about Dread Presence. You could cut 1-2 Syphon Life for it. Cool build! +1

MontaukMonster: lol, you've probably played the deck more than I have tbh, recently anyway. (I have a lot of decks.) But your advice sounds good so I'll continue to keep it mind. And thankfully Dread Presence is not very expensive, so if I feel I need some after a few playthroughs, then I can order some (my LGSs kinda suck for singles).

Aww Dread Presence was one of the strongest plays for me

MontaukMonster: Hey there, great advice, and thanks for your time! As you can see above I'm taking a lot of your advice already. I had to scavenge one of the Cabals and the Dread Presence for a new EDH deck I made, but I'm hoping with the addition of more draw and some tutors that it won't hurt.

With Vampire Nighthawk illegal in Pioneer, that leaves Gifted Aetherborn and Gary as my only lifegain. I'd have to buy cards if I wanted to try something new.

I still need 2 more cards to complete the deck, so I may end up just putting some Duress es in there in the end.

Attack me I dare you

Nice I rly like it I would put in Dark Ritual just to help get you set up sooner and for some card draw I rly suggest Dread Presence as it is flexible with gaining life or drawing cards. and maybe some things like Sign in Blood which can get you cards but sometime be a rly funny finisher, or Treacherous Blessing as the life lost overtime is not that big of a deal. but overall is an interesting idea that I like because you are able to keep it budget

Vito, Thorn of the Dusk Rose can get some life out of the stolen creatures. Whip of Erebos does it better. Dread Presence is great for lifegain, with a draw option, too. Exquisite Blood can get you life if youâve got the money for it. Blood Artist could work if people are sacrifice lots of stuff because of you. Pontiff of Blight and Exsanguinate work well with lots of mana.

I tried making a list of creatures alone to cut but it's too large. Basically, the majority of your creatures cost too much and their effects are not worth the cost you are paying. Moreso, the effects don't seem to interact with each other.

For example, you have some token based effects such as Drana Liberator, blood artist, ayara, but not enough token producers in the deck despite grave titan and wurmcoil. Bloodgift, burning and archfiend are all subpar demons that don't matter to an infect strategy. Tymaret is not the best grave yard hate piece in black.

Before I give you a long list of potential cards, do note, you need to work on black's weakness of interacting with artifacts and enchantments. I will create options for that in another comment later, if you are interested in that lmk. Now for potential suggestions....

Sword of Truth and Justice - Synergy, protection. Not needed but fun

Magus of the Coffers - Ramp rarely hurts. Lack of haste, weak body makes it less playable, but ramp is needed after they kill your commander a few times

Nirkana Revenant - Ramp, this and magus, while expensive, actually help you cast the other spells you need (Draw, removal, etc...) as opposed to having a cool creature that doesn't give you the best benefit

Mikaeus, the Unhallowed - Another target for removal aside from your commander

Deadly Rollick / Dismember / Force of Despair - Not needed, but interaction for free should not be overlooked

Defile / Tragic Slip - Cheap removal, being in black, you have the best instant speed creature removal. Don't be afraid to use it

Malakir Rebirth Â Flip/ Supernatural Stamina - Oh no, you destroyed my commander, whatever will I do....ooh, nice ETB creature you killed, Eminem's guess whose back plays. Notice how these 2 cards help mitigate a large weakness of the deck, commander removal.

Dark Ritual / Arcane Signet / Mind Stone - Ramp to get your commander out earlier, you need much much more ramp in this deck. A lot more

War Room - Draw in a pinch

Feed the Swarm - Removal that targets enchantments, one of black's weaknesses

Yawgmoth, Thran Physician - Not needed, but profilerate is cool if you can't close out through combat

Howl from Beyond / Hatred - Obviously

These are just general suggestions that have some immediate impact of being strictly better than current cards included as well as more synergistic.