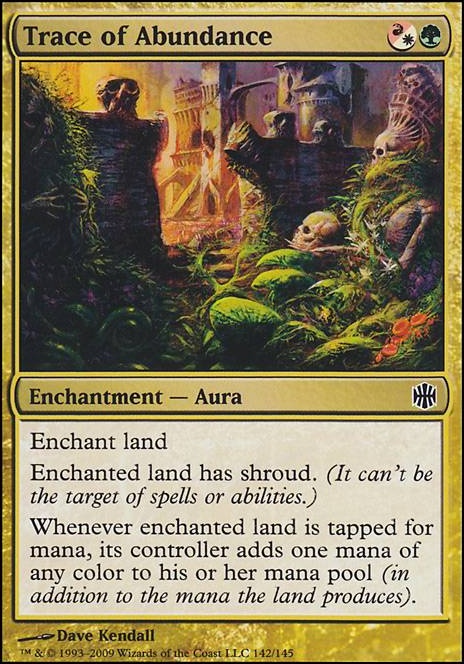 Enchanted land has shroud. (It can't be the target of spells or abilities.)

Trace of Abundance occurrence in decks from the last year

The Infinite King
by the_carrot

love the idea. I plan to do a similar thing with all random eggs.

I have played a number of other Atla decks though and I have some suggestions:

Take out Bird of Paradise and add in Wild Growth, Utopia Sprawl, Fertile Ground, or Trace of Abundance. Take out Eternal Witness and add in Reinforcements, Noxious Revival, or Reclaim. Take out Sakura Tribe Elder and add in Nature's Lore, or Three Visits. SUmmoner's Egg is aMust, Mirror Entity, i understand why you want it. The other two eggs though, I don't think are worth the include. I would instead add Strionic Resonator which would have a better effect.