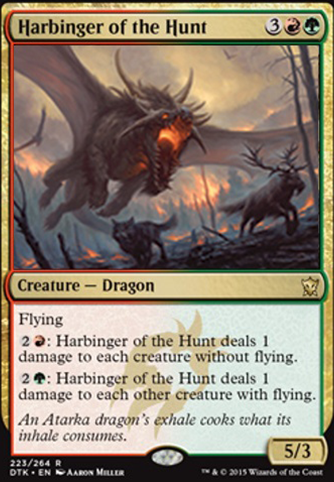 : Harbinger of the Hunt deals 1 damage to each creature without flying.

: Harbinger of the Hunt deals 1 damage to each creature with flying.

The Draconic Empire [Casual]
by CardTyrant

Harbinger of the Hunt Discussion

Hello! Great Deck. I enjoy the addition of some lesser played cards in the archetype like Goreclaw, Terror of Qal Sisma , Harbinger of the Hunt and Shaman of Forgotten Ways . A few suggestions: I think you should cut Thunderherd Migration for a Rampant Growth as it is just strictly better. Cut Savage Stomp for removal like Beast Within or Krosan Grip as they are less conditional and generally do a lot more for little extra cost. I think you should play Urza's Incubator instead of Semblance Anvil and generally Signets are better than Lockets unless you're really lacking in that card draw, but even then just run a Harmonize or something. Have a look at my decklist, you may get some ideas. Hope this helps!

You have a good point. I might need to run a counterspell package, after all.

So far I plan following:

- 8/8 that is likely to make another very strong creature, maybe even Surrak, +4/+4. Just found out about this awesome dude.0
- Single player (most of the times) boarwipe. Especially good agains token decks since those don't bounce. I also have River's Rebuke , which is tiny cyclonic rift.

And Gyre Engineer is questionably to be swapped with Incubation Druid , since latter can be pumped to give 3 mana and become 3/5 to survive small wipes.

What do you think? I definetely need to clear some space, but right now I am not sure what to remove. So this is what I have: Counterspells:

Only 4 counterspells in 100-card deck... I am really not sure. Maybe Mystic Snake or Frilled Mystic would be better? Boardwipes: Other stuff

I don't run tutors not because they are expensive (Though Wordly Tutor, Gamble and Mystic Tutor are fairly affordable as an upgrade), I don't want to make deck too (uhh) strong. I made Lavinia, Azorius Renegade deck which revolves around getting Knowledge Pool out, and if I draw one of the artifact tutors and have anti-counter in hand, I win, it's only a matter of time. Which is nice to spook new players, but not that great when I play N'th game with same people.

I'm going to post several posts, each with a different topic. This way I don't get halfway through and it glitches, or I run out of time and can't finish.

First post is about dealing with tokens. Here are some options for dealing with go wide strategies (decks that swarm opponents with large amounts of creatures).

There are different ways to battle these types of decks. I am including only cards available in these colors:

Crawlspace - stops you from getting attacked by their army of tokens.
Powder Keg or Ratchet Bomb - gets rid off-the-wall tokens.
Pyroclasm or Anger of the Gods gets rids of tokens while they are small.
Mizzium Mortars - overloaded kills them when 4 toughness or smaller.
Insurrection - use their army against them.
Basilisk Collar let's you out live the armies.
Steel Hellkite - let's you pay 0 to get rid of tokens if it deals combat damage.
Balefire Dragon - gets rid of most creatures if he gets combat damage in.
Harbinger of the Hunt - repeatable token hoser. If you equip the collar it wipes all non fliers.
Siege Dragon - also fun with the collar.
Subterranean Tremors - good for token sweeper.

TypicalTimmy on Exciting Cards in M19

My #1 favorite set in the entire history of Magic was the Tarkir block, specifically Dragons of Tarkir. I know most people went for Khans of Tarkir because of the fetch lands, but I'm not a very competitive player. I like flavorful decks, big flashy cards, stupid combos, and awesome finishers.

So when I saw the plethora of Dragons in M19 my inner fanboy freaked!

I currently have like four or five Dragon decks. Gruul, Jund, Rakdos, Azorius (That one sucks but is fun to play), and I had an older Jund deck that I quit using because it was making problems with my group.

I gotta say, Sarkhan, Fireblood pairs especially nicely with Sarkhan Vol. Their +1 abilities line up rather nicely. Draw a card and give your bois +1/+1 and Haste or pop out a Dragon and give it +1/+1 and Haste. Very nice.

Sure, Fireblood is two turns slower to ult but you also now have 8 cards in your deck that do the same thing (If you so choose). Dragon decks centered around Scourge of Valkas and Dragon Tempest will have far too much fun with these.

Which leads me into Sarkhan, Dragonsoul. I currently have a Mono-red Dragon deck that actually ramps via Dragonlord's Servant and Infernal Plunge. I'm definitely able to make room for at least two of these guys, which is going to be awesome.

Another interesting pairing I can work with is Demanding Dragon and Glorybringer, alongside Thunderbreak Regent. That's an awful lot of control-like aspects in MRDs.

Stepping aside from Dragons now, I'm also super excited for Apex of Power as I routinely run decks that can very easily achieve those levels of mana, though I may just run a single copy in a deck as Genesis Wave is strictly better. For 10 mana, you get X=8 and they hit the battlefield. Though what's interesting is if you cast an Apex of Power, you can filter the top seven and Genesis Wave the next 8. I'm not 100% certain if this is a good idea or not, but it could be worth looking at.

I'd also like to say that I'm super excited for the new Gruulfriends deck I can build around Vivien Reid and Domri Rade. If you get both emblems, which should be rather easy to do in Gruul, everybody now gets the following:

Also, can I just say that Resplendent Angel alongside Nyx-Fleece Ram + Inventors' Fair + Venser's Journal + Fountain of Renewal + Radiant Fountain is dangerously potent when you consider Angelic Accord and Archangel of Thune are a thing.

Also worth noting: Amulet of Safekeeping + Mechanized Production is a serious power play.

Also a new Reverberate in the ways of Doublecast is pretty neat. Might have to make a copypasta deck running those and Howl of the Horde...

It's also nice to finally have a new Hydra addition that doesn't completely suck.

I also run a Mono-Black Demon Tribal centered around the following:

So, naturally Liliana's Contract is a nice addition. Worth noting: Grixis Arcane Contract will be fun.

I like your idea of combining pingers with enrage, i think it could be improved with pingers that hit all creatures instead of one target like Fire Ants or Subterranean Spirit, Endbringer (if your mana can support it) could fit in that category too allowing you to enrage during each other players turn.

Other ways to get enrage triggers on opponents turn include activated abilities like: Pyrohemia and Harbinger of the Hunt (honorary dinosaur)

I would recommend replacing some of the pingers that only hit one target (without haste) Prodigal Pyromancer, Frostwielder, Dinosaur Stampede, lightning bolt and shock (one time effects)