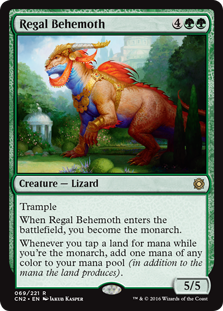 Trample When Regal Behemoth enters the battlefield, you become the monarch. Whenever you tap a land for mana while you're the monarch, add one mana of any color to your mana pool (in addition to the mana the land produces). 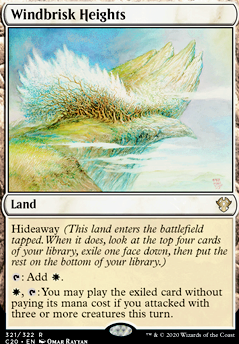 You have a few repeatable draw effects, but consider Court of Bounty ? It can be repeatable draw as well as land ramp or cheat a Dino onto the battlefield. Bounty helps Regal as another way for you to become the monarch.

Consider budget creature tutors Mwonvuli Beast Tracker and Fierce Empath ? Empath can get Regal or any other 6 CMC or higher Dino. Tracker can get Quartzwood Crasher or any other Dino who has trample. Either of these tutors can get Regal and that's helpful because it's the best Dino for ramp into Gishath. Tracker also puts the creature you tutor for on top of your library thus if you have the mana you could tutor for a Dino before you attack with Gishath.

Seething Song and Mana Geyser are budget rituals that can help to cast Gishath. In multiplayer Commander Geyser can make a lot of red mana.

A small amount of additional p/t for Dinos from anthems is not worth taking up card spots since Dinos are already big. Getting draw from casting a Dino is not as good as draw from a Dino ETB since most Dinos are high CMC and you don't cast Dinos you cheat onto the battlefield with Gishath.

Big Mana, but in an actual interesting way. No more of that namby-pamby, Omnath, Locus of Mana/Regal Behemoth/Goreclaw, Terror of Qal Sisma nonsense. Might as well hit me with a wet noodle. No, I'm talking Derevi, Empyrial Tactician Elfball Flash Enablers Big Boi Destruction Timeâ ¢ . Let's break it down. You've got your Elfball base, with the rote one-mana nerds, and some more spicy meatballs, like Priest of Titania or Kinnan, Bonder Prodigy. Then, the standard non-stax Derevi package. I'm talking Unblockable Slimy Bois for the untaps, Willbreaker for all the creatures, and the best untap triggers money can buy. Skyshroud Poacher is broken, and can tutor up whatever you want, Azor's Gateway Â Flip for all the mana, etc. And then, the super-spicy meatballs. Yes, this means the flash enablers. With Derevi's broken untap ability, if you have a flash enabler, you can untap something like Faeburrow Elder 4 times, have twelve mana, and be able to cast twelve mana worth of stuff, because you can use your mana during your combat step, that means if you get 6 untap triggers, with a Wirewood Channeler tapping for 8 mana, you can cast 48 mana worth of stuff. No longer are Elesh Norns and Avacyns of the world are no longer confined to the oblivion of Turns 7 and 8, you can cast them on turn Three! Trust me, no one will see this coming. DESTRUCTION

Regal Behemoth is excellent too.