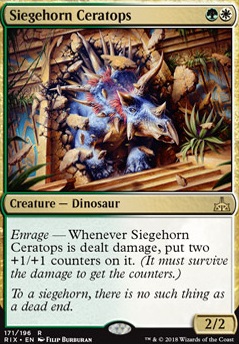 Enrage - Whenever Siegehorn Ceratops is dealt damage, put two +1/+1 counters on it. (It must survive the damage to get the counters.) 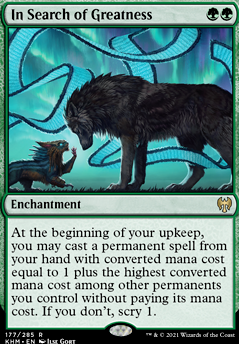 I would suggest adding more Dinos that have "Enrage" in order to take advantage of having 4x Forerunner of the Empire in. For instance, Needletooth Raptor is great for removing small to medium threats. Polyraptor is a great card to take advantage of this, obviously. So is Siegehorn Ceratops , though the Siegehorn doesn't pair well with Marauding Raptor

I'm thinking what would be fun in this deck is going with a fight theme. Load up with all the good fight cards and creature cards like Siegehorn Ceratops, Silverclad Ferocidons, Snapping Sailback,Spitemare, Boros Reckoner, Sporeweb Weaver.

From my understanding damage from fighting is not combat damage, so Tajic, Legion's Edge could be an interesting route to take. If your just using fight as removal.

ScionsStillLive, i'll admit you do have a point but dropping to 18 creatures in a tribal deck seems like a rather low number. What Dino would you suggest replace Siegehorn Ceratops? It has to be relatively low cmc, and can't be a Generic Big Boi - it has to have some synergy with the themes of this deck.

ScionsStillLive, according to EDHREC the average number of lands in a Zacama deck is 36. Cutting down to 34 for a bit more interaction doesn't seem too detrimental. Yes, the Siegehorn Ceratops is a sad weak little poopoo saur, but until a better low cmc Enrage naya dino comes out itll keep its spot.

ScionsStillLive, Siegehorn Ceratops does...kind of suck. I'll admit I wish I had a better dino for the slot. I think your suggestion is a good one, i'm just hesitant on making the swap because i'll be losing a dinosaur and i'll be losing a potentially great option for an Enrage Trigger. Honestly, I wish there were just more viable early game Enrage Dinos out there to choose from. Crazy idea...but what if I were to cut Kessig Wolf Run to make room for Primal Might? Both are sort of in the same slot in terms of functionality...but the land isn't quite as useful.

Maybe cut out Siegehorn Ceratops for Primal Might? I know the siegehorn comes out early and be a bigger creature later on, but its highly unlikely to trigger much cause it will probably just die.