Whenever this attacks, gain . You don't lose this mana at the end of steps and phases until the end of your turn.

Sure, an Ancient Dragon would fit, but I don't think Ancient Bronze Dragon or all the other Ancient Dragons are worth their price. All are wildly overpriced since their power relies on randomness of the die. Yes, you could roll a 20, but you could also roll a 1. For the price of one Ancient Dragon you could instead make quite a few card upgrades.

Niv-Mizzet, Parun is really good in multiplayer Commander and when you control two Niv then it can be a huge advantage. Irenicus's Vile Duplication is new card in Dominaria United and it's powerful for less than $3. Make a token copy of Miirym or any other Dragon you control.

@ Vlasiax Maybe Savage Ventmaw has a place in the deck, but I'm not sure about Aggravated Assault. The combo is good, but having to make room for them might be an issue, and off theme a bit. I'll leave that to Forkbeard.

I have a Sylvan Library, but actually took it out of my other dragon deck. No doubt it's strong, but with some already synergistic card draw available already, it felt like a "win more" card for my particular deck. I don't have a mana crypt, but if I did I don't think I'd use it, but that's just more of me keeping the power level of my deck in check.

Well, Niv is copied upon ETB, not cast.

So Niv sits on the stack while you Cascade into one of the others.

I actually added Maelstrom Wanderer during my last upgrade to test the waters with it. But your idea likely is a bit more stable.

I was actually thinking of adding Kruphix, God of Horizons to hold onto the mana from Savage Ventmaw and Klauth, Unrivaled Ancient as well as just generally pooling unused mana. Even considered Kinnan, Bonder Prodigy to bypass the whole draw, cast and mana issues. Getting 7+ mana is easy. Getting something to use it on? Eh not so much.

I go for specific print runs. Those with bolder, darker or more vibrant colors depending on what I am going for. I'm a bit busy, but here is a quick example.

Savage Ventmaw has a few printings now, but the print from Dragons of Tarkir comes both with the Temur watermark and has the darker colors on the Dragon, making the flame look more alive and powerful.

While this may be difficult to notice, here is a better example. Flameblast Dragon from Shards of Alara may be the oldest and thus the most valuable, but I prefer the coloring of Commander 2018 because the glow in the fire and the lighting it casts upon her body and wings and scales looks far more intense.

So, for me, since I'm the one who has to look at them and play with them, I want colors that pop. Be it shading, illumination, vibrance or anything else that properly suits the card art in question.

If only Retreat to Coralhelm were in color. You could use the ole Aggravated Assault + Savage Ventmaw combo to get the same effect, but at that point you have infinite mana and damage anyway....

Normally Ganax would ETB and create a treasure for himself. However, prior to Ganax resolving, stack Miirym in front of him. Miirym resolves and she creates the token.

The token of Ganax will see itself and make you a treasure token.

OG Ganax will see the token and give you a treasure token.

OG Ganax will also see himself, giving you your third treasure token.

The way this can be turned infinite is with Parallel Lives or a similar token doubler. Because now what actually happens is a little more complicated.

But recall, Parallel Lives sees all of this happening and is going to double all of those treasure tokens, too. So your +7 treasure are now +14.

You're about to run out of gas if you don't have draw. So, slap some draw on top of this. Garruk's Uprising, Temur Ascendancy, Kindred Discovery, etc. Anything that draws you a card whenever a creature ETB. Works best if they do not care if it is a token or nontoken creature. So a card such as Guardian Project does help, but it won't draw you for the tokens.

If, within any of these three, you draw another appropriate Dragon (Or already had one in your hand), you have now gone infinite. Because if you cast, say, your Savage Ventmaw what happens is the following:

So you just spent 6 mana to produce 18 mana, and you just played 1 card to draw 3 cards.

As long as you have a sufficient density of Dragons in your deck, you are now infinite.

Alternatively to a token doubler such as Parallel Lives, you can use Goldspan Dragon to allow your treasures to add x2 mana. If you do this, it'll work as well. This is because if you have two Ganax online and you get two Savage Ventmaw, you will produce x4 total treasure tokens, but these x4 will produce x8 total mana.

So it'll be tighter on mana costs, but still gets you ahead.

However, you won't draw as many cards, so you may sputter out a bit too soon. So while Goldspan Dragon is an appropriate stand-in, she is like Guardian Project in that she is not as efficient as some other options.

If you really want to be dumb about it all, you can make it infinitely more janky.

You require: Miirym, Sentinel Wyrm, Ganax, Astral Hunter, March of the Machines and something such as Crucible of Fire.

I think you can figure out what happens here, if you add Maskwood Nexus into the mix, haha. 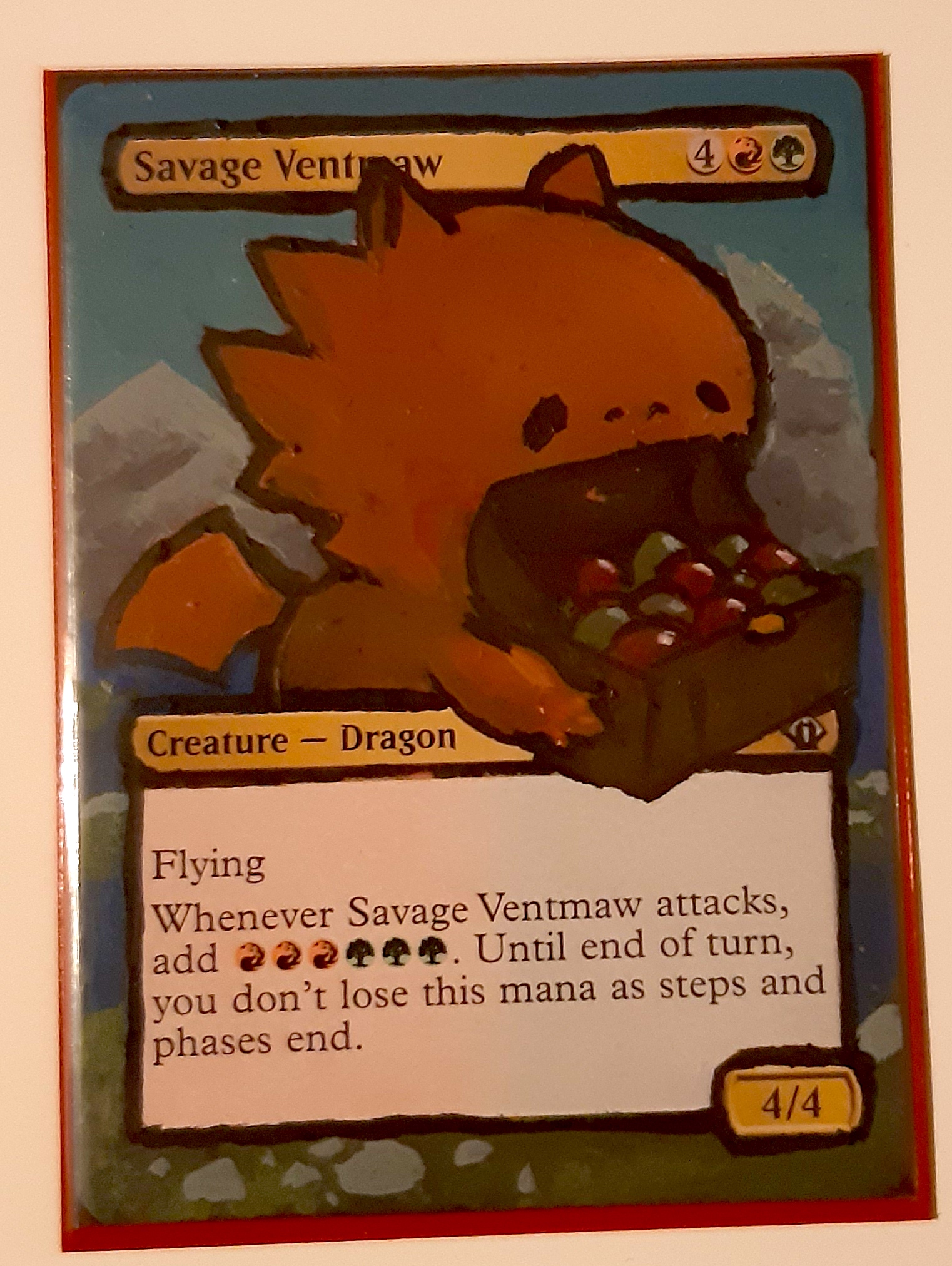