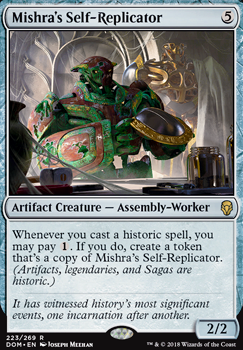 Whenever you cast a historic spell, you may pay . If you do, create a token thatâs a copy of Mishraâs Self-Replicator. (Artifacts, legendaries, and Sagas are historic.) 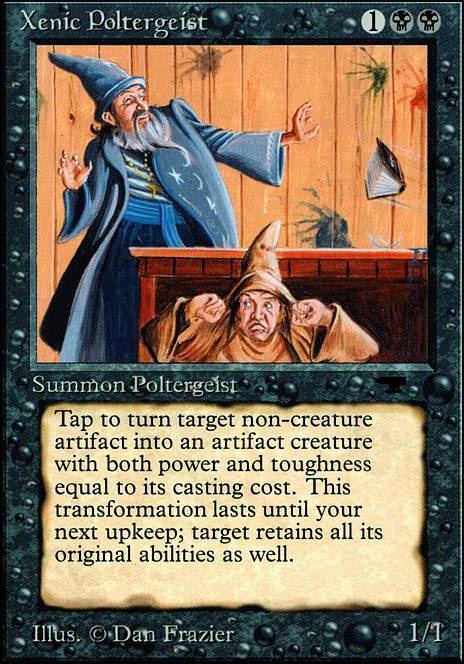 Hicvelox might be a good name. It's Latin for "Quick Builder".

But overall, I think it's decently balanced for a legend, even if it is a strictly better Myr Enforcer. As an Assembly-Worker the flavor is spot-on; it reminds me heavily of Mishra's Self-Replicator.

I've decided to swap Tempt with Vengeance out for Mishra's Self-Replicator as a way to generate tokens. It should be fairly easy to trigger, and has an interesting interaction with my 2 mutate creatures as well.

By the way, all my games so far with this deck have been a blast.

Spine of Ish Sah seems like a perfect fit here, as Bosh can throw 7 damage at your opponent's face turn after turn while it blows up a permanent every time. Mishra's Self-Replicator also seems like it could provide some solid reliability: every time you play an artifact, it's just to get another 5-mana artifact to chuck at your foe.

If you really want some big-league damage, though, I think Metalwork Colossus could fit the bill. Thank to all of your artifacts you should be able to play him for a considerable discount, but he still hits for 11 points when you fling him at your foe. Best of all? You can even ditch a couple of tiny trinkets to bring him back for another round!