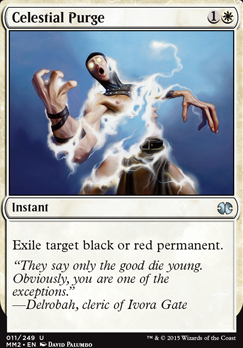 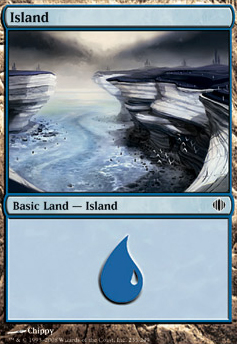 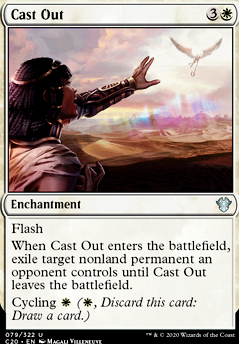 Why couldn't you stop Me?
by snotice 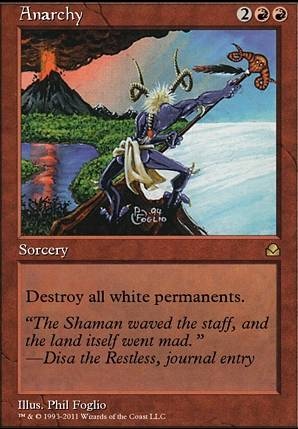 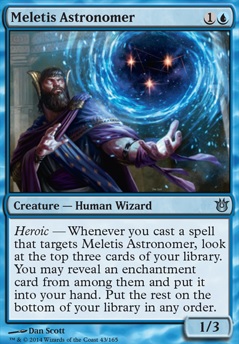 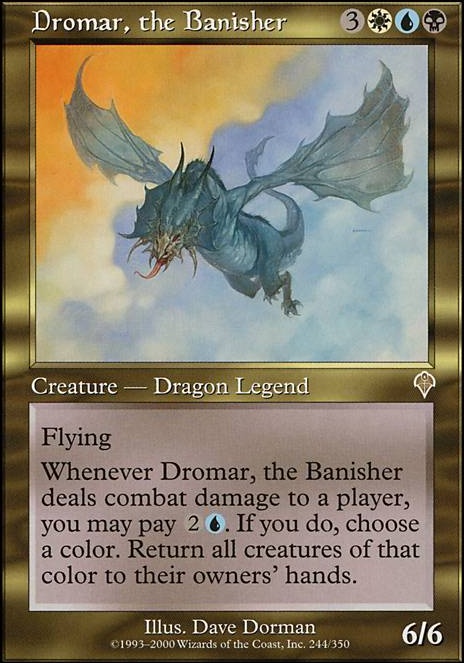 Howdy! Looks like an interesting budget brew! I see you run Absorb , but I don't see a way for you to produce white mana. So maybe something to either consider cutting, or making it a white blue deck?

If you do go that route, for your sideboard Disdainful Stroke , Ceremonious Rejection , and Timely Reinforcements are useful against Eldrazi Tron or any single target big creatures, like Death Shadow decks, as the life gain helps you stabilize and the creatures allow you to chump block to get to the late game. Celestial Purge is another cheap card to slot in against relevant decks. Mystical Dispute is useful against the plethora of Snow decks out there.

In the post ban modern meta game, where we had to part with cards like Field of the Dead , Uro, Titan of Nature's Wrath , Simian Spirit Guide and most importantly (as a miracles deck) Mystic Sanctuary , there are several control/combo decks, that are not going to be playable anymore. Uro decks, ad nauseseam decks, etc. With the absenc of these abussive control decks, I reckon there's going to be a lot of "land decks" coming back. Titan-shift, tron, eldrazi-tron, and decks in general, who abuse their vast mana base. For this reason, this is a note to my future self (as my ocd won't allow me to have some cards in the deck, that I have no intention of buying right now), on what to put in the side-board. First off, I think there should be 2x Surgical Extraction , which work reall well with Field of Ruin , and then getting rid of all these non-basic (non-interactive) mana sources. I think aggro decks will be very popular - burn, death's shadow, humans, that's why I think 2 (or even 3) copies of Timely Reinforcements will be a must-have. Two Celestial Purge are a staple against jund, so no change there. One copy of Ashiok, Dream Render for the grave-hate. I'm not a big fan of Rest in Peace , because I like working with my graveyard with Logic Knot and Snapcaster Mage , so I'll be leaving them out. Two copies of Dovin's Veto and one Dispel for the control mirror matches. Two Monastery Mentor , because simply I'm in complete love with this card, and I'll play it till the end of days. 2x Stony Silence for the artifact deck, another staple here. And one copy of Teferi, Hero of Dominaria for the grind matches with a lot's of turn.

Please let me know if you have other suggestions/predictions for the future of miracles (or uw control in general):-)

Also Sram, Senior Edificer and other card draw would be good. maybe swap out Celestial Purge for Journey to Nowhere for even more card draw.

I hope that would help align the deck.

jaymc1130, If you badly need exile beyond Swords to Plowshares and Path to Exile you can run Reality Shift, Dire Tactics, Angelic Ascension, Blitz of the Thunder-Raptor, Celestial Purge, Scorching Dragonfire, and Scorchmark.

While it doesnât exile Mystic Subdual is also worth mentioning.

WotC finally printed a mono-black card that can unconditionally destroy enchantments, which I do not particularly like, since being unable to destroy enchantments was an intentional weakness for black, but I shall tolerate it, provided that it does not start a trend.

However, I feel that it would be much more appropriate for black to have a card that reads âdestroy/exile target green or white permanent,â since white has Celestial Purge, which can exile permanents of whiteâs enemy colors, and black already has Deathmark, which can destroy creatures of blackâs enemy colors.

What does everyone else say about this? Could black have an effect such as that?

Declaration in Stone is pretty decent, but it is also a Sorcery. I think people have a misconception that Instants are better strictly because they allow for more immediate response. While speed is an undeniable advantage, in a deck without ramp, making use of mana on opponent's turns can also be more efficient. For example, with an Instant in hand, you can use untapped mana to remove a threat on an opponent's turn, then untap those lands on your turn, whereas a with a Sorcery, you have to wait until your turn and then choose between casting a removal spell or a creature spell. And then there's range - not all removal spells are equally useful, and in my humble opinion, Generous Gift is pretty solid - not only is it an Instant, but it works on everything. Of course, it also comes at the top of realistic CMC, vs stuff like Fatal Push and Path to Exile that are much narrower, but also allow versatility in casting more spells. I usually run 1-2x of a couple different removal spells that overlap, but also give me range. The added upside to singleton removals is that spells like Surgical Extraction etc that consider additional copies in hand/deck/graveyard, etc fizzle. The downside is against spells like Duress that reveal your hand, as singletons will make it easier for opponents to count your cards (as is true with land art). That's not something I usually care about, but I understand why other people do. I usually prefer white removal to black, so I might run something like 1x Blessed Alliance (versatile and works against hexproof/indestructivble), 1x Generous Gift (works against everything at Instant-speed), 1x Declaration in Stone (very strong against tokens and it exiles), 1x Cast Down (value of speed and application). I don't think this approach is favored in competitive play. Indeed, part of the reason for it is budget-related. If I could afford 16 copies of Path to Exile, it would be in a lot of my decks. And certainly, some of the same logic is generally reserved for Sideboards, which I also use to pad out my top removal spells along with other utilities like Pithing Needle , Ratchet Bomb , Nevermore , Celestial Purge , etc.

Yes, I think you should still try to lower the CMC. In a fast format like Modern, 5 mana on T5 isn't a lot! That's a total possible casting power of 15 over the course of your target game, and that's assuming you play a land each turn. (That also means you'll only be looking at a maximum pool of 12 cards, and 5 of those must be lands! So what 7 spells can you cast for 15 mana? That's only 2.14 mana on average!) If you consider the likely possibility that at least 2 of that 15 must be spent in preventing an opponent from winning, that leaves a maximum of 13 mana to cast other spells. If at least 1 of those other spells is going to be a wincon that costs 4 or more, that leaves 9. This is why spells like Sorin, Vengeful Bloodlord are so difficult to use. If you cast him, you're left with only 5 mana total over the course of 5 turns to cast other creatures and spells. That's only 2x 2CMC creatures. Having 20x 2cmc creatures guarantees you'll get a couple, but it doesn't offset the price of trying to play bigger spells. If Sorin gets removed, or hit via evasion, trample, etc, you can lose a lot of limited resources, and because of spells like Generous Gift and Beast Within , opponents can remove any big threat for less than you can cast them. This can easily slippery slope into getting a combo and protecting it at all costs, which I think, while sometimes fun, is also not as good as a deck without a central/obvious threat. I'm big on value and synergy. Like, I think 30x Champion of the Parish and 10x Brave the Elements would beat just about anything. This all applies to your report on trouble with heavy counterspell/removal. Without a lot of disruption, you've got to be able to play creatures for less than opponents spend to remove them. That usually means no more than 4 spells at 3CMC and only 1-2 at 4+CMC. It also usually means at least 6 1CMC spells. Of course, you're constrained by the theme of the deck, which is all about life-drain, and I think you're way out in front of foolhardy decks trying to play Exquisite Blood+Sanguine Bond among a smattering of other 3CMC+ spells. That said, you still want to make your deck as competitive as possible within your budget, so anywhere you can make the deck faster, more efficient, and more consistent, you want to trade power all the way down to the minimum. Most games, you only need to get opponents from 20 life to 0.

To address Tron, I think it's worth going back to removal options briefly to point out that Generous Gift works on lands, which can be used to shut down Tron decks or at least slow them down. The great thing about GG is that it works on other stuff, too, making it considerably better than something like Rain of Tears , which is so specific and narrow, it's hard to justify even in a sideboard. Other stuff that's great against Tron: Ghost Quarter and less budget friendly, Field of Ruin . Damping Sphere is solid, too, and will favor your heavy-ish use of limited mana, as it's very possible you'll only have enough to cast 1 spell on many turns. To some degree, all this also depends a bit on what sort of threats the Tron decks you're facing are putting down, as it's a pretty broad archetype. Sometimes more removal or board wipes can be useful, but given the mana Tron produces, it's usually difficult to keep up with it once it's assembled. Oh. I got really carried away. Sorry about that. I hope some of this is useful.