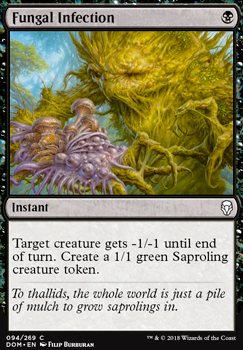 Target creature gets -1/-1 until end of turn. Create a 1/1 Green Saproling creature token.

Bunch of Fungis
by Sidetrack

Mono Black Sac But With More Famine
by Commander_Olim

I wouldn't let go of white as Intangible Virtue is pretty much mandatory for a token deck. I have considered adding black, but I think it makes the manabase a little too complicated and expensive for not that much benefit.

I like Slimefoot, the Stowaway and was so happy when it came out that there was a legendary fungus, but ultimately I feel like he's better on Aristocrat-style decks (which's the direction people usually go with GB Saprolings, with the tokens being there mostly for sacrifice rather than attacking, which's why they don't need things like Intangible Virtue. I'd probably give him more thought if splashing black didn't require such a big investment.

Nissa, Voice of Zendikar is a little weird here, I like her -2 but not for 3 mana (assuming I only get to do it once), and her -7 doesn't have any synergy with the rest of the deck (as I run very few lands and generate mana in other ways). If her +1 was a proper Saproling instead of a Plant I'd deeeeeefinitely be running her, though.

Sprout Swarm I really like, I ran it for years, but five mana for a Saproling, even if it can be recurred, was just a too slow for the level of performance I wanted from this deck and it couldn't keep up with newer additions. If it made 2 tokens for the same cost, it'd be amazing, but as is it doesn't make the cut.

Mycoloth is a big no-no also as I used to run it way back in the day and it was a removal magnet that took my entire board with it. Won a few games thanks to having it, but mostly it just made me lose and the wins would have been wins anyway if I had other finishers instead of it. Fungal Infection is really nice, I like that it's Sprout with removal attached to it, but it would require me to run black and I don't know how much room I can make for removal (right now I'm running white and have no Path to Exiles and some people would consider that a crime lol). Finally Korozda Guildmage isn't really a good fit regardless of color because there aren't any nontoken creatures with relevant toughness for it to sarifice.

And Aura Mutation would've been a great sideboard card, but it's sadly not Modern legal.

Either way, thanks a lot of stopping by and commenting!!

Have you considered making this deck three colors or perhaps even simply ?

I like the thought of Slimefoot, the Stowaway and Nissa, Voice of Zendikar in this deck. Also Sprout Swarm as you can buyback the card when you have the extra mana.

At the very least, Aura Mutation in the sideboard?