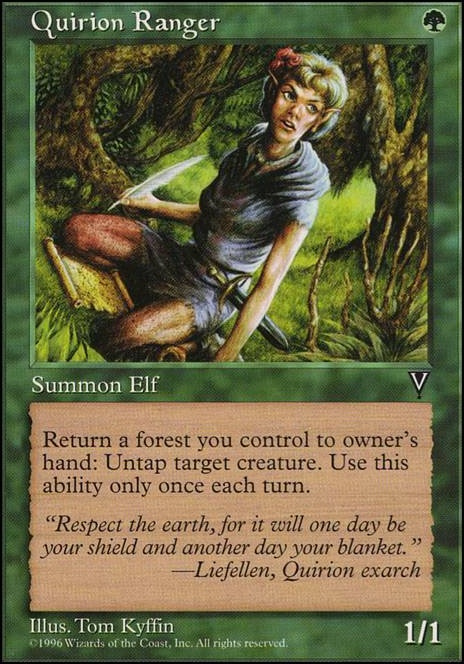 Return a Forest you control to its owner's hand: Untap target creature. Activate this ability only once each turn.

Cool deck idea! Glad that commander is getting some love!

Some interesting things to look at. Kogla, the Titan Ape has some interesting synergies with your commander. Oketra's Monument can help explode your board presence in the early game, and any of the token doubling enchantments seems equally good! It might not gel extremely well, but Shaman of Forgotten Ways is a mana dork that can also be a wincon. Esika's Chariot seems right up the decks alley, as it makes tokens and can copy your tokens as well! Myth Unbound also seems decent if you start running into targeted removal. Quirion Ranger also works with your tapping and untapping plan!

If it's in your budget The Great Henge goes really well with all your mana dorks! Also Eldrazi Monument seems like it would be good with your source of repeated creature making!

Ecological Appreciation is a really strong tutor for this, surely? At 5 mana you threaten: Scryb Ranger , Quirion Ranger , any of your winning dorks (even Lotus Cobra ), stax and more. Is there enough redundancy to make piles for this card?

I doubt it's great as I can't see many immediate gains, but Yedora, Grave Gardener does give the benefit of protection from wraths while giving you cards that can be returned with your rangers, rather than having to be returned with e-wit. Just wanted to make these known

35-38 would be solid in my opinion. I tend to run slightly fewer lands in heavy ramp decks because it's harder to miss. My Karametra deck currently runs 34 lands but is far less landfall heavy than yours.

Maybe a better focus down the road would be more sack outlets + recursion.

Taking another look at your list, Quirion Ranger is fantastic. Especially when paired with Ashaya, Soul of the Wild & Karametra, God of Harvests . Have to check the rulings but it may be an infinite landfall combo.

Selvala, heart of the wilds

Storm is a deck archetype where the idea is to cast a ton of spells in a single turn in order to win that turn. Traditional storm decks are blue and red and use cards that provide excess mana such as Rite of Flame and cantrips like Ponder to dig through their decks to find their win condition which is usually either Grape Shot or Empty the Warrens . In the case of Selvala, Heart of the Wilds (usually called Bro Storm) the idea is to play out the entire deck with a huge Genesis Wave or by turning your creatures into cantrips with cards like Soul of the Harvest and Glimpse of Nature along side big mana generators and large draw spells like Regal Force or Return of the Wildspeaker then attacking for lethal.

That is how Phyrexian Dreadnought works with Selvala but can easily generate much more mana than that with untappers such as Seeker of Skybreak and Quirion Ranger in play.

It requires seven mana but that is the combo i was speaking of. There was another one but my mind is fried right now from lack of sleep.