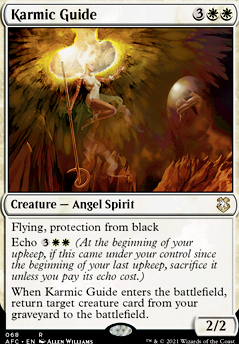 Flying, protection from black ((Remember the acronym debt.) This can't be damaged, enchanted, equipped, blocked or targeted by anything black. Anything black attached to this immediately falls off.)

I think after this recent reprinting, Karmic Guide qualifies as pretty budget, and she is great enter-the-battlefield spirit fun.

Hey, a budget creature who's good with Alesa is Vile Entomber . It can be a repeatable way with a sac outlet to tutor for any creature to get into your graveyard to reanimate with Alesha. Goblin Bombardment was just reprinted, it's budget now, down to $1 and it's one of the best sac outlets in Commander. Bombardment can be a win condition with the combo of Karmic Guide + Reveillark .