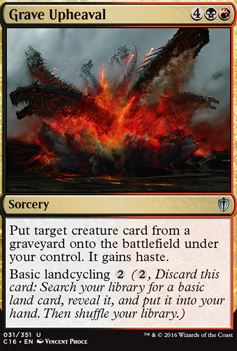 Put target creature card from a graveyard onto the battlefield under your control. It gains haste.

Basic landcycling (, Discard this card: Search your library for a basic land card, reveal it, and put it into your hand. Then shuffle your library.)

Grave Upheaval occurrence in decks from the last year

I'm pretty happy that you're pretty happy about it! 12 mana rocks might make you mana-flooded, but that's always better than being mana-screwed! Might I suggest Quicksilver Amulet ($5) to aid in throwing out the big creatures Kaalia grabs? If you can load up more Legendary Angels (There's a TON!), Demons (Some pretty good ones!), and Dragons (On par with Demons!), Thran Temporal Gateway ($0.50) will do the same for less $$$! Helm of the Host ($5) Gives that ETB effect, but the equip can be a bit costly. Deathrender ($2) will punish your opponents for non-exile removal, but I think Kaya's Ghostform ($0.15) would be PERFECT for your deck. Grave Upheaval ($0.50) would give you a bit more recursion from removal as well, and - at worse - help you sort out your mana. Cauldron Dance ($0.15) can do the same AND throw down for cool combat tricks, minus the manafix! Through the Breach ($6) gives you an instant ETB to use for combat and great at surprising your opponents with indestructible or the likes. Sneak Attack ($20) does the same and is repeatable, but suffers from removal and is hecka expensive!

I hope I was able to give some good possibilities that you could consider. Your deck looks great and I like that you're rolling with the new Kaalia!

I noticed that my initial list lacked some ramp. Some cards also underperformed, so here's the changes:

Deathsprout replaces Mortify - Not being able to remove enchantments is not an issue as there's still some powerful interaction. The ability to ramp while removing stuff justifies additional cost.

Torrent of Souls replaces Grave Upheaval - A bit cheaper with an additional upside of pumping all creatures so you have payoff for creating all those tokens. Worth sacrificing that basic landcycling.

Camaraderie replaces Gelatinous Genesis - I found Genesis to be a massive win more and conditional card. It gets really good IF you manage to get a lot of exp counters and put Mizzix on the table. Camaraderie is a solid card that does a lot of stuff this deck wants to achieve.

Kiora's Follower replaces Incubation Druid - Despite +1/+1 counters subtheme, I found that it's actually pretty hard to put them on Druid. I also thought it can give mana of any color. Follower is similiar to Druid, but is fetchable, can untap Gates or Deathrite Shaman when I need them or give pseudo-vigilance to creatures.

Astral Cornucopia replaces Commander's Sphere , Mirrodin's Core replaces Mountain - Not putting them in a deck with proliferate theme was an obvious oversight.

Jhoira of the Ghitu replaces Nin, the Pain Artist - I put Nin as a cheap multicolored card that can be also valuable later. But the value than Nin provides is quite expensive, and using it as removal is even worse. Old Jhoira is also cheap and cheating stuff for low cost is always great.

I'm also looking for cuts to put Ramos, Dragon Engine (put him along with Ezuri and live the dream) and Maw of the Obzedat here (great payoff for tokens and costless sac engine)

I wasn't very active lately, but I got to update this deck recently and based on your comment I've added Torrential Gearhulk, Price of Fame and Discovery / Dispersal to the deck. (You have not suggested the last one, but your suggestions kinda led me to it.) So I just wanted to let you know and thank you for helping with the deck. :-)

Also, you've mentioned that you use Breaking / Entering. You could consider swaping it for Grave Upheaval as it is exactly the same as Entering and instead of Breaking you get Basic landcycling, which seems a bit more useful to me.

Anyways, thanks again for your suggestions and have a nice day!

No worries! Imo cards to be considered cutting would be Akroma's Vengeance, Defy Death, Grave Upheaval, Angel of Deliverance, Deathpact Angel, and Rout. They are all pretty high costed and there are better alternatives as well not impactful enough for being at their cost.

You'll want the new Sarkhan Planeswalker in M19, Sarkhan, Dragonsoul. To make space for it, I'd personally take out the Grave Upheaval. Maybe alter the mana base to be more proportional to your devotion, like taking out some red/black or red/green lands for black/green lands or Darigaaz's Caldera. Other than that, the deck looks incredibly fun!