Tap an untapped Druid you control: Add (Green) to your mana pool. 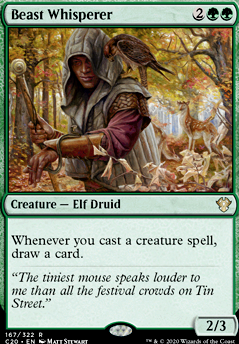 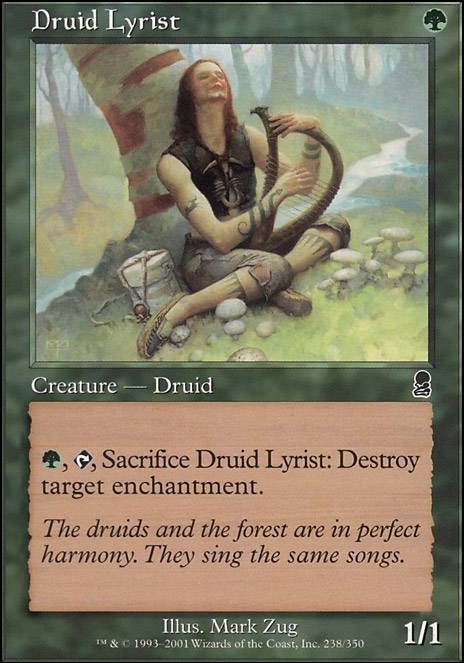 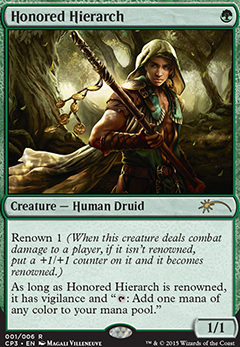 "The Retirement Fund"
by PhoenixWombat

seton up a board
by meME12 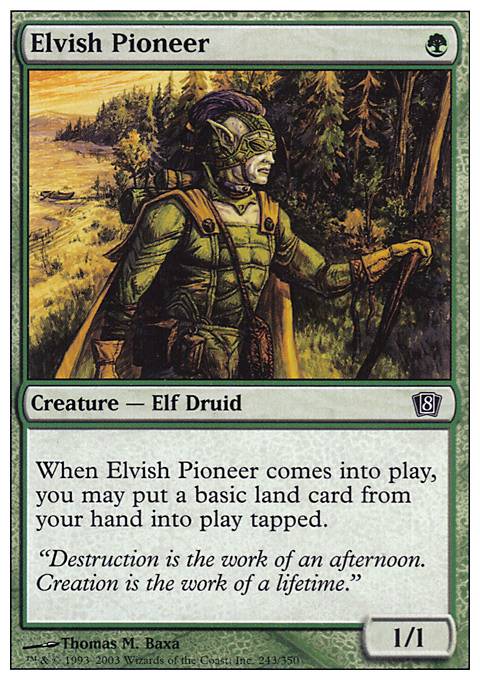 Cloudstone Curio makes one drops have infinite ETB/cast triggers when Seton, Krosan Protector is out. (need 2 one drop creatures)

Be careful when using Beast Whisperer, Glimpse of Nature, Guardian Project, and Vanquisher's Banner as you dont want to mill yourself.

Stone-Seeder Hierophant and Elvish Pioneer also work really well with Cloudstone Curio and another 1 drop creature. This gets all lands into play untapped from your hand.

Note that after drawing your deck you will have some combination of Mobilize, Vitalize, and Benefactor's Draught. Playing all of the one-drops (and other low-cost minions) can help get you the mana to start going infinte.

Use the mana and your deck

lets use our deck now.

Gilt-Leaf Archdruid is a good first option, taking your opponents lands removes most of their options

We can pump up our creatures using Leyline of Abundance, giving creatures infinite +1 +1 counters

Thorn Mammoth and Vigor remove your opponents board. If they somehow have enough toughness to still be alive, you can use one of the infinite ETB combos.

Craterhoof Behemoth is the only card we have with haste, but it shouldnt matter as they wont have lands (Gilt-Leaf Archdruid), creatures (Thorn Mammoth + Vigor), artifacts or enchantments (Acidic Slime + Temur Sabertooth)

I feel like Seton, Krosan Protector should be in 'Competitive' as opposed to 'High Powered'. I have a tuned, but not fully optimized, Seton deck that consistently combos out turn 5 and my current list has the ability to combo as early as turn 2. I think there is enough support for it where it should fall into the Competitive category.

I just took apart my Tatyova druid deck, since the landfall fit wasn't great for what I really wanted to do, which was yoink. I think I'll be rebuilding with Chulane, Teller of Tales , though, before I build with a mono-green druid commander like Seton, Krosan Protector . The deck can still be heavy green, but for such a focused strategy, what you really need to be able to do is dig through your deck, and both Chulane's ability and having access to blue are great for that. You also get access to Tatyova, Benthic Druid , Rashmi, Eternities Crafter , Noble Hierarch , Bloom Tender (yes, I know you get it in mono-green, but you see how that doesn't matter), Faeburrow Elder , Coiling Oracle , and Wood Sage .

Recycle maybe? I play it in my Seton, Krosan Protector deck and it does a really good job. You already play Reliquary Tower and Crop Rotation so as long as you get the tower on the field after Recycle you don't have to worry about your hand size.

Big fan of this deck!

Have you considered Concordant Crossroads ? Apologies if so, didn't want to read through all the past versions though.

I enjoyed the thought of a Gilt-Leaf Druid win so much I made another (much more budget) version that's probably a turn or two slower with Seton, Krosan Protector and more druids: 25 Pence Urza.

Thatâs another great point! I shouldâve taken a second look at your basic land count before suggesting. I know what you mean about a list getting restrictive. Im at that point with a bunch of my decks it gets hard to cut some stuff. Thanks for the follow and suggestions! If I think of anymore I will gladly post again.

I have a land deck of my own with The Gitrog Monster . I like where itâs at but if you have some good suggestions Iâll definitely consider them. Also looking for feedback on my new Feather deck. If thatâs not up your alley, then check out Seton, Krosan Protector if you have the time! All 3 listed below:

MagicalHacker I will keep an eye out for it! But I apologize, as I may have worded my last post poorly. The deck I'm tearing apart is Karametra which seemed slow/clunky as a ramp type general and I was contemplating building Marwyn, the Nurturer , Feather, the Redeemed or Arixmethes, Slumbering Isle .

Marwyn would be another ramp general but is much faster. She has the support of elves and can achieve infinite mana quite easily even without Marwyn which is nice. Seton, Krosan Protector was another thought but druids are a bit more limited and are mostly useless without Seton (aside from Gilt-Leaf Archdruid ).

Feather seems fun/easy to build but I tore apart my Zada deck which was very similar (granted it focused on generating tokens which is what my Purphoros deck did). Voltron isn't necessarily my thing (Both Rafiq and Karlov taught me this) so I will probably abstain.

Lastly, Arixmethes is the only one not like anything I've made before but that might be due to it's type/color. Can also easily go infinite green but seems slower than Marwyn. However he is in Simic colors which can enable more shenanigans. A 12/12 is amusing for general but non-sea creature themed decks are a little harder to come by!